This week’s update sees changes to the basilisk knights and feedback changes to The Fremennik Exiles.
Basilisk Knight Improvements 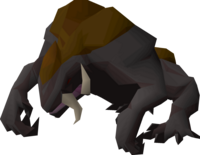 Last week we released the latest instalment in the Fremennik questline: The Fremennik Exiles! If you haven't completed the quest yet, you can find the requirements and more information in last week's game update post.

Many of you raised concerns that the basilisk knights were both too easy to kill for a monster that drops an upgrade item for creating a best in slot helmet, and not very entertaining to fight. In response, we're increasing their stats and adding an extra mechanic: a special attack which entombs the player in stone. This can be dodged by moving out of the projectile's way or escaped by trying to move while entombed. The superior versions also have this attack. Additionally, we have removed the safespot outside the room.

We've also made the following changes based on feedback from the quest:

In case you hadn't heard, RuneFest 2019 is happening this weekend on Friday 4th and Saturday 5th October! We'll be kicking things off on the Friday evening by celebrating the community with the Golden Gnome Awards. On Saturday there'll be a whole host of activities, chances to meet the J-Mods as well as your favourite content creators, and of course, the big content reveals! Head to last week's game update post for the full schedule. There's still time to grab your ticket at the last minute if you'd like to attend.