Deep in the confines of the Edgeville dungeon, a giant hill giant lurks. Get your hands on a giant key and take on Obor, the hill giant boss!

In order to fight Obor, the giant hill giant, you must first obtain a giant key. These are dropped by hill giants all throughout Old School RuneScape and are available in both members and free-to-play. 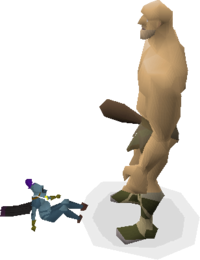 Once you have found a giant key you can access Obor's lair via the western wall of the hill giant area within the Edgeville dungeon.

Come prepared, as Obor won't go down easily! Unlike other hill giants, he has various types of attacks at his disposal. Be ready to get thrown about, knocked down and knocked out!

Obor has a slim chance of dropping a Hill Giant Club. This is a best-in-slot crush weapon for free-to-play, requiring level 40 Attack to equip. It provides the following stats 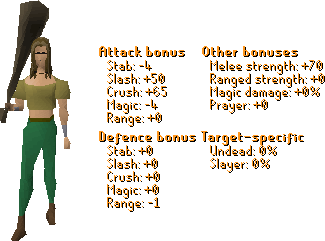 With this season of Deadman Mode, trading was disabled outside of the Grand Exchange in an attempt to both lessen the impact of swapping and make teaming more of a challenge.

So far, we've seen the changes have little impact on the number of players able or willing to swap or team in order to gain an advantage.

We'd like to make sure that if the intended benefits of this change are not being seen, the resulting negatives aren't either. For this reason, we've decided to enable trading outside of the Grand Exchange for the remainder of the season.

We've seen players progress incredibly quickly this season in Deadman Mode, and this has left some players just starting out in a tricky position when trying to progress.

In order to help players starting out in Deadman Mode, we've now re-instated the 6 hour immunity for players who have just started in the new season.

The following worlds have been reverted to standard Old School RuneScape worlds:

Since the release of the Wintertodt we've been keeping an keen eye on the impact of the boss on the prices of various items. Over the past few weeks, we've seen larger changes in the price of some items than we would've liked to have seen.

In order to address this, we're changing how loots from the Wintertodt are determined in order to make the rewards more appropriately balanced.

Your rewards from supply crates will now be dependent on your levels in various skills.

This change means that the Wintertodt will remain lucrative for players with high levels in the stats listed above, but players just meeting the minimum requirements to access the boss won't be earning quite as much.