This week, we’re bringing you more Quality of Life updates from Poll #73! 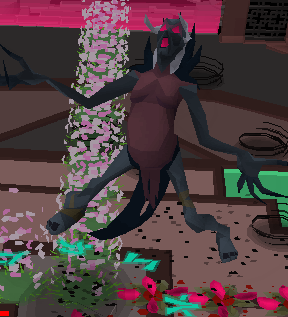 Gielinor’s scariest boss has been updated this week in-line with the changes you voted for! She says “thank you” and also “[guttural screeching noises]”.

To kick things off, The Nightmare’s initial start timer has been reduced from 40 to 30 seconds. If you’re brave enough to fight her more than once in a row, you’ll need to use the ‘Disturb’ option to wake her from her slumber, which will start a 10-second countdown.

You’ll also notice some changes to one of the key parts of The Nightmare fight itself. From today, when fighting her in groups of five or more, 200 will be added to her shield and 30 will be added to her totems’, down from 400 and 60, respectively – all of which should make the fight more exciting. In addition, you can now use Prayers to fully negate the damage from The Nightmare’s husk and parasites.

There’s good news for treasure seekers, too! Firstly, the cost of the Eldritch Staff’s Special Attack has been reduced from 75% to 55%. Secondly, your chance of getting your own Little Nightmare pet has been rescaled depending on the size of your group. Here’s the new drop chances:

Lastly, we’ve resolved the audio bug that was making the sound effect played when The Nightmare’s Confusion Curse ended too quiet. We’ve also resolved an issue where The Nightmare would sometimes appear to be facing away from the player who took damage, because she was re-targeting the player with the highest Defence halfway through her attack. 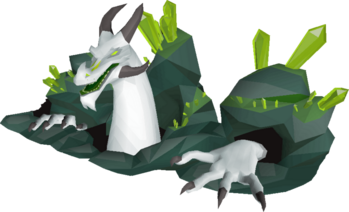 Meanwhile, across the pond, Chambers of Xeric has also undergone a few renovations.

To complement this change, a secondary checkbox has been added to the Party Board outside the Chambers of Xeric that lets you toggle between regular and large map pools.

Now, onto everyone’s favourite little dudes - scavengers! From today, scavengers will spawn more consistently, with a preference for locations near players. This should make them easier to catch, which in turn will make this room a little less frustrating.

In addition, when killing a scavenger, a message will appear that makes it clear who will receive the drop.

Lastly, if an Iron player deals the most but not all of the damage to a Chambers of Xeric boss, all other raiders will receive a message announcing that they have earned the drop. This message will override any chat filters you have enabled, so don’t worry about missing it.

Keep an eye out for more Poll #73 updates in the coming weeks!

We received a number of player reports regarding Ice Barrage casting faster than intended with the Double Cast Relic. Upon further investigation, we have identified and resolved a bug that was causing Ice Barrage to cast faster with certain weapons, specifically Ahrim’s staff.

This bug meant that in almost all PvM scenarios, using Ice Barrage with the Ahrim’s staff was the best possible damage output achievable.

Much like the Bind spells accuracy bug, we considered making no changes at all and leaving this as an additional perk of the Double Cast Relic. If Ice Barrage was unintentionally faster for all weapons within the game, then it’s likely we’d have kept this behaviour during the League. Ultimately we decided that leaving this bug in-game would be unfair to anyone that planned their route based on optimising their single-target damage with items such as the Sanguinesti staff, something you’d expect to perform better than an area of effect attack with a much lower requirement item.

Ice Barrage will still remain to be 100% accurate with the correct gear, making it a very strong option throughout the entirety of the League, but there will be certain encounters where other equipment setups are more viable.

Another week, another round of cheeky fixes to our new favourite game mode! Here’s the list of changes for this week:

Here are the points thresholds for each rank in the Trailblazer League as of the time of this update:

We’ve got a cracker-full of new goodies launching in time for Christmas!

‘Scape up your desk space with this new range of deskmats, featuring Darkmeyer, the Abyssal Sire, and the art from Deadman Mode!

And if you want to feel extra-cosy while showing your support for the best MMO in the world, check out the PK Skull Varsity Jacket – or play it cool with the Vorkath Ringer Tee.

So, what are you waiting for? Go on and browse the Official Merch Store!

Should you feel like helping us shape the game, have a go at this quick ‘n’ easy survey.