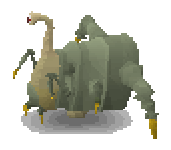 It is time, once again, to board the pet hype-train... The penance pet is here!

The challenge of taking on the Penance Queen is one that has beaten many good players in the past. We felt that players who have mastered the art of egg-launching should have a shot at getting their very own penance creature, and you agreed.

The penance pet is now available as a rare reward from high level gambles at Barbarian Assault. If you've ever, for some strange reason, wanted a miniature version of the egg-spewing behemoth to show off around Gielinor make your way to Barbarian Assault and find yourself a team.

The Barbarian Assault gambles have never really been particularly rewarding, receiving a dragon chainbody from a high level gamble was about as good as it could get and that was so rare that we weren't sure if it had ever happened in the history of RuneScape.

The rewards from the Barbarian Assault gambles have been significantly improved to make them a much more appealing way of spending your points. If you want to try your luck then head over to Barbarian Assault and say goodbye to those hard-earned points.

Inventory space is something that is very valuable to anyone taking on a combat-based challenge. Whether it is PvMers trying their chances in the God Wars Dungeon or PKers in a full-out war, every little helps. Super combat potions are now available that combine super attack, defence and strength into one handy potion.

Using a torstol on a super defence, attack or strength (4) when you have all three in your inventory will create a super combat potion (4). This potion will not give any additional boosts, it will simply combine the super sets into one potion.

If someone on your friends list has recently changed their name you will now be able to see what they were previously known as by hovering over the small icon that will appear. This should make keeping track of who-is who much easier.

This week we have launched infrastructure in preparation for the release of in-game polls next week. We are going to be testing in-game polls in the live version of the game to make sure everything is running as it should be. A few of you may stumble upon a polling booth but, for now, it will be out of order.

Don't miss our Q&A livestream from 5pm on Twitch!