We've spent a lot of development time on combat updates lately, rejuvenating the Wilderness and updating Slayer, so we're kicking off this month with something for the skillers amongst you - the brand new Sailing skill!

Captain Emmemji has moored a flotilla of sailing ships south of Draynor Village. He's got small boats for beginners, with long boats and wide boats that you can unlock at higher Sailing levels. Head south from the bank to find him. 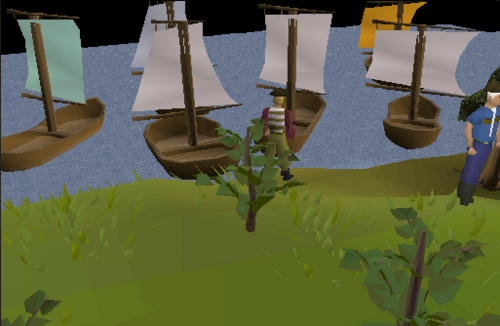 So hoist your sail, weigh your anchor, shiver your timbers and splice your cabin boy - Sailing is here, and the prevailing winds around Draynor are ideal for a voyage to some of the distant Eastern lands. In the Islets of Langerhans, you'll encounter various strange creatures and characters. Maybe you'll learn a secret about the gods themselves, or see a sight that cannot be unseen!

When you reach level 99 Sailing, the sail of your ship will become a skillcape, and the ship itself will perform the emote. We're aware of a bug where this can cause severe damage to scenery if the ship performs the emote indoors; please refrain from doing this in major cities or other players' houses.

Future Sailing expansions will include the ability to build your own ship in a player-owned house dungeon, the opportunity to use 'rum' on sailor NPCs to press-gang them into your crew, a selection of mermaids and mermen to marry, and the ultra-rare catamaran. Sailing will also bring tradeable rewards for merchants: after a particularly long voyage, when water supplies have run low and the crew are reduced to bottling their urine, this new potion will be sure to fetch a high price.

A new Sailing-related quest will be in development shortly. Fed up with waiting for those pesky elves to open the gates of Prifddinas? Once you've got an adequate Sailing level, you'll be able to help Trader Stan and his crew sail around the side, bypassing the gates entirely. 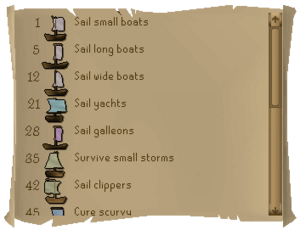 As is traditional with the release of a new skill, its XP will not be available from features such as Tears of Guthix for a while.