On Friday, June 4th we edited the release blog to confirm we were going to make changes to A Night At The Theatre based on your feedback. We were considering one of two options: Relegating the quest to be a miniquest, or redesigning the quest to be a proper narrative experience. We’ve opted for the second, and we’ll be undertaking that work immediately.

We expect to update the quest in July. The current quest will remain available until then and we will update you when we have more to share.

We'd like to thank you for all of the feedback since yesterday's game update. We've collated some of the most notable pieces and detailed our plans in the table below and what we would like to do going forward.

It’s all kicking off at the Theatre of Blood this week – are you tough enough for Hard Mode? We’ve also made some adjustments to Clans, keeping it running smoothly so you can concentrate on knocking seven bells out of one another. Hurrah! Let’s take a look… 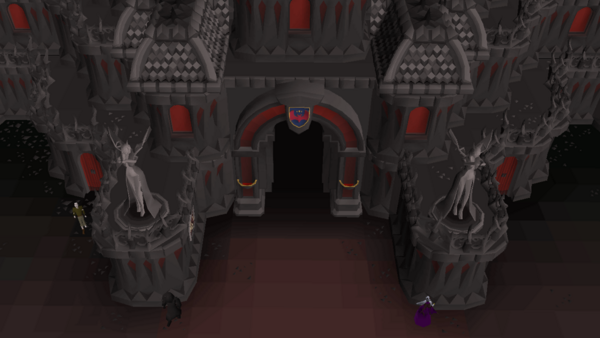 Have you always wanted to tackle the Theatre of Blood but aren't sure if you’re ready for its toughest challenges? Or maybe you have mastered this deadly arena and want to ramp up the challenge to the max? Well, we have good news either way…

Verzik Vitur has issued a new challenge, and the mysterious stranger has a new request for you to fulfill... time to head to the Theatre!

This is the most challenging version of the Theatre of Blood, and it's seriously gnarly. We haven't just increased the monsters' stats, like in Chambers of Xeric's Challenge Mode. Most rooms have completely new mechanics, or a tougher twist on the existing ones. You must have completed the normal Theatre of Blood at least once to access this terrifying new mode. It's as hard as the title suggests, but here are the rewards that will make it all worthwhile:

These untradeable ornament Kits allow you to transform the following items into Saradomin-themed versions: Ghrazi Rapier, Sanguinesti Staff and the Scythe of Vitur. The latter item also boasts a second ornament kit, the Sanguine Ornament kit, which will give you a more vampiric look to your weapon. Fangtastic! 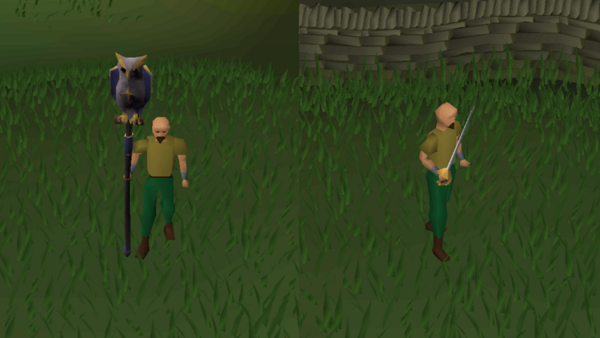 You can simply click on the kit, followed by the corresponding item, but if you wish to change all weapons in one fell swoop, you'll need three Holy Ornament Kits and a Sanguine Ornament Kit. If you change your mind about your new gear, the process can be quickly reversed by right-clicking and selecting 'dismantle'. 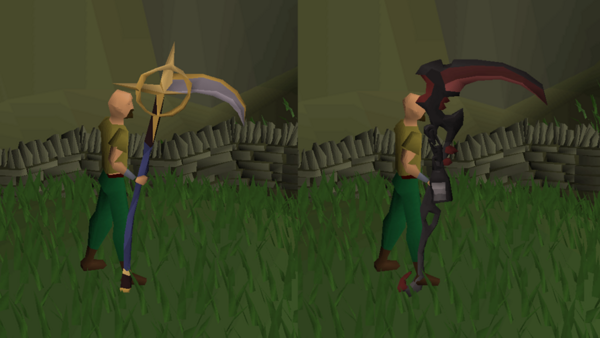 The kit is destroyed on a PvP death, dropping the regular item it was attached to. These kits are now included in the Collection Log for Theatre of Blood.

You'll also have a chance to grab yourself some Sanguine Dust. Sprinkle it over your Lil Zik to turn it into a transmog based on the Theatre's bosses! That includes the Maiden of Sugadinti, Pestilent Bloat, Nylocas Vasilias, Sotetseg and Xarpus. You will only need one Sanguine Dust to have access to all of Lil Zik's transmogs, and you can freely switch between them once the pet is transformed. 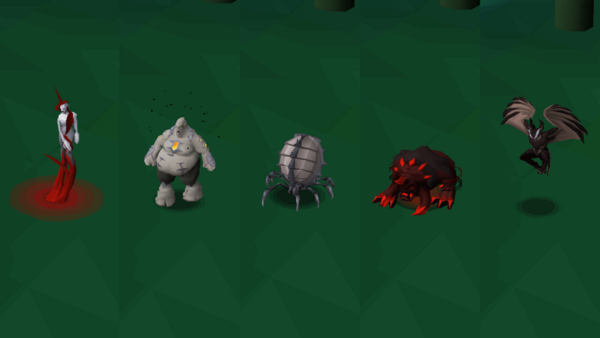 A Night At The Theatre

The Mysterious Stranger lurks outside of the mighty Theatre of Blood, the centrepiece of Ver Sinhaza. This shadowy figure has a new request for you – to humiliate a vampyre noble by the name of Lady Verzik Vitur. Take on the challenges that lie within the Theatre to reach her and bring a blush to her bloodless face! 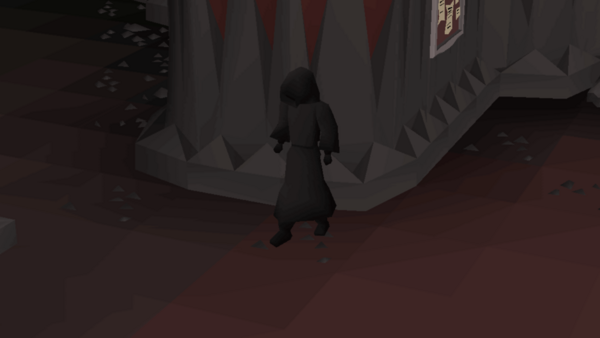 To complete A Night At The Theatre, you'll need to have done the following quests:

Upon completion you'll be rewarded with:

This quest can be completed on any mode, but has been designed primarily for Story Mode.

Story Mode will offer the same standard structure as normal, with the actual mechanics mostly unchanged. However, you'll have the benefit of three lives to compete with. Those three lives will be counted as a safe death, and if you lose one, you'll be teleported to the entrance of the last boss you fought (apart from Hardcore Ironmen, who will still lose their status on the first death). If you die after all three lives are used, a normal death will occur and you'll have to claim back your items and retry from the beginning. 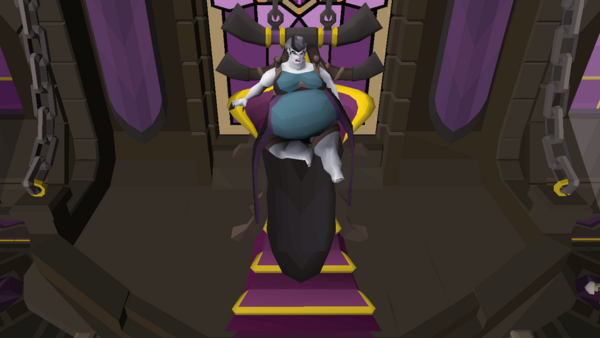 Alhough Story Mode yields rewards, they have a heavily reduced rate compared to the existing mode, and you won’t have a chance to grab any of the Theatre's uniques (including the pet). You will, however, get to lose yourself in the thrilling narrative without the usual amount of pressure! Go on, take a bite…

On the scoreboards, there are two new options for Story and Hard modes, so you can keep track of your times and completions at different difficulty settings.

Personal Bests have also been split into group size, similar to Chambers of Xeric. Your existing Personal Best has been automatically moved to the five man group size, as it has the fastest potential scaling.

In any mode, each boss will now drop their corresponding book as you defeat them, allowing players to absorb the story as they progress. These informative tomes can still be found on the bookcase within the treasure room too.

When using mid-raid chests, you can select from previous quantities of a particular item you have bought, rather than inputting the number every time

Special attack power will continue to regenerate when you are inside Theatre of Blood and Chambers of Xeric raids. Special attack energy will be restored to full when entering Theatre of Blood, while remembering how much energy you had when you entered the raid. When you exit the raid, your energy will return to where it was when you entered. This is the same system implemented in the Six Jads challenge.

Players can now only buy one stamina potion from mid-level chests. This is to discourage players from obtaining an excessive amount of stamina potions.

Last week saw the long-awaited release of the Clans system, and we've got to say, we couldn't be happier to see so many communities emerge! Here's a little bit of insight, as of around 11:00 BST on Wednesday June 2nd:

We've also loved hearing your great ideas for how we can continue to improve the Clans system. Some of those ideas vary in scale, ranging from small quality-of-life tweaks to major new ways to customise your Clan. We can't offer those larger changes just yet, but rest assured: we've already been working on some of your feedback changes, which will be coming soon. We'll continue to look at your suggestions for future Clans updates, but in the meantime, here's this week's tweaks:

Players will now automatically rejoin a guest channel if they were in one when they last logged out. This will only work after the update goes live, so you'll still have to rejoin the chat on your first login.

The bank sign in the Clan Hall no longer blocks line-of-sight, so you can cast the telegrab spell through it.

We've relaxed the restrictions on what you can do while wielding a vexillum. You can now teleport, enter the Wilderness, fletch, blow glass and perform emotes while your vexillum is equipped.

You'll now be able to select a custom colour for all of your different chats using RGB and hex code colours! 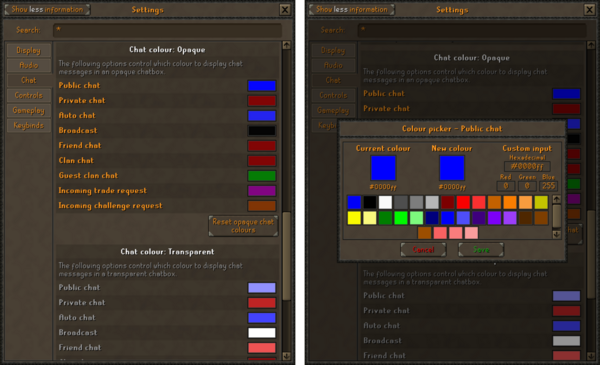 Purchasing rewards from the Last Man Standing store now requires 48 hours of playtime as a member.

Players can now set how their friend login/logout messages display: On, Timeout and Off.

Iron players are no longer able to enter the shared God Wars boss room instances if another player is already fighting in there.

Inventory space checks are now performed correctly for coffin loot in the Hallowed Sepulchre, so that items only overflow onto the ground if they need to.

A typo has been fixed in Serafina's Diary.