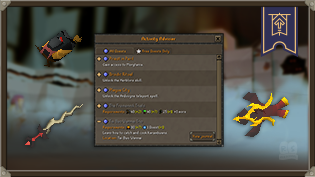 Hotfixes and Our Actions - September 8th

This week, we have more Tombs of Amascut changes and an update on the Activity Advisor!

Just to let you know, from this week's update onwards we'll be using a 45-minute in-game timer starting at 10:45 BST. This allows players more time to finish up longer activities (such as a Raid) before game updates. There will be about 5 minutes of downtime for maintenance.

You’ve made it clear that the balancing changes we introduced last week missed the mark. We’ve since made a number of hotfixes, the details of which can be found in this newspost. Go check it out if you haven’t already!

In today’s update, we’re following up with more fixes:

We want Tumeken's Shadow to feel like a dominant force and a huge upgrade both inside the Raid, and out. On that theme, the following stat boosts will now apply when wielding Tumeken's Shadow in Tombs of Amascut: 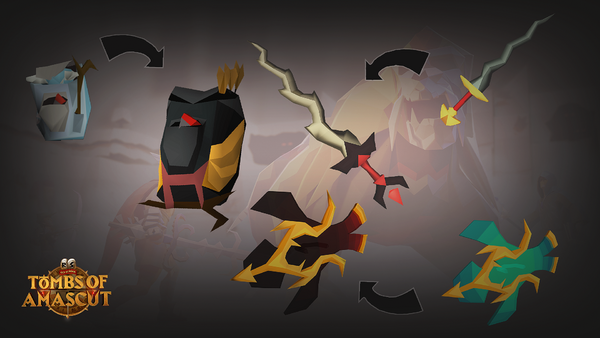 Amascut’s plans have been foiled over a million times now, so we think you daring tomb-raiders deserve a reward! How about some of that fancy new FashionScape you’ve been drooling over?

Three new Ornament Kits have been added to the Tombs of Amascut. You’ll be guaranteed the following items when you complete the Raid with no deaths at or above a certain Raid Level:

The Ava's Assembler Ornament Kit will be unlocked when you complete the Raid with 350 Raid Level or higher. You’ll notice that it perfectly complements other recent ranged gear… 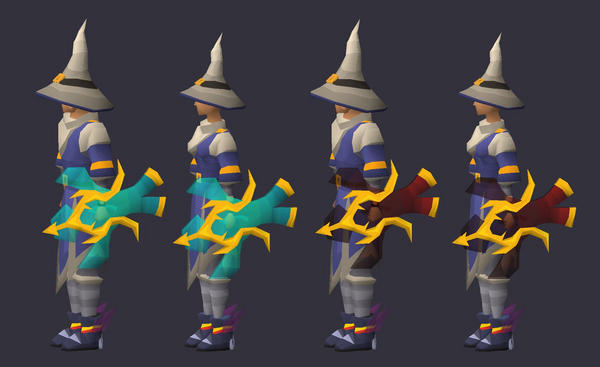 The Ward of Elidinis Ornament Kit will be guaranteed as an unlock when you complete the Raid with 425 Raid Level or higher! The dark red look is sure to make players turn heads when you walk past!

If those weren't badass enough, the Osmumten's Fang Ornament Kit will be guaranteed as an unlock when you complete the Raid with 500 Raid Level or higher! You’ll want to handle this one with care… it looks sharp!

And if that’s not enough, check this out: ambitious raiders will now be able to unlock various transmogs for Tumeken’s Guardian!

There are eight transmogs available in total – the existing two, modelled after the Wardens, two are destroyed versions of the Wardens, and four more which correspond to each boss.

And you get these fantastic beasts guaranteed after meeting certain conditions. These include:

Please note, only one morph can drop per run.

If you can meet the above conditions, you will receive an item in your loot chest to use on the pet!

As promised, we’re also making some minor changes to Invocations, to ensure they’re balanced. Because we’ve increased the reward space for the raid with this week’s update, it’s especially important that Invocations add the appropriate amount of Raid Level for their actual difficulty.

These balancing changes are not intended to make Tombs of Amascut unreasonably difficult. We’re proud that this is our most accessible raid yet, and we intend to keep it that way!

That said, small tweaks here and there are critical to preserve the longevity and enjoyability of our content.

The changes above are moderate and should not adversely affect players of general raid accessibility.

As always, we welcome your constructive feedback. Are there any more Invocations you feel should be changed? Let us know! You can submit feedback through all the channels mentioned at the end of this blog. 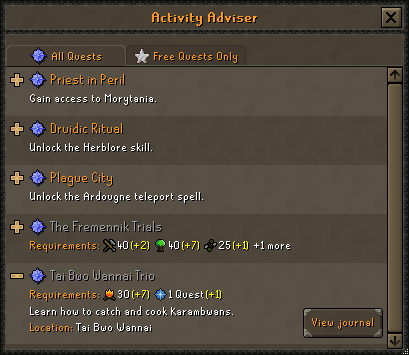 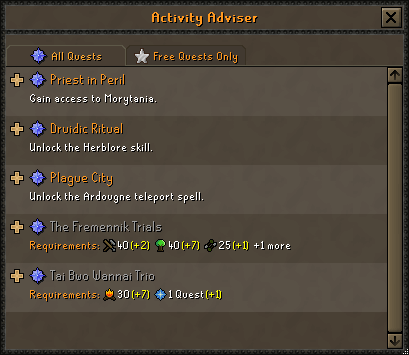 Some of you will have had the chance to test and provide feedback on our new Activity Advisor – and you liked it so much that it’s going live for everyone in this week’s update!

The Activity Advisor is an in-game tool for new and returning players to receive bespoke recommendations for activities they might like to try. It tracks your progress, automatically tallying your skill levels, quest status, recent activity and other essential stats to figure out which new adventures you might be interested in. At the moment, the Activity Advisor only suggests quests, but we’re looking to expand the system to include skills, minigames, and other activities later.

Please note that due to their unique gameplay features, Deadman Mode and (future) Quest Speedrunning Worlds will not have access to the Activity Advisor.

Lastly, if you decide the Activity Advisor is not for you, you can disable it at any time via the Settings menu.

We’re really interested in seeing your feedback on this one, so it’s time for a survey! Click the button below to tell us your thoughts.

PvP Rota
The PvP rota has moved to Period A:

The PvP Arena is using 'Zerk' loadouts in Ranked Duels and Tournaments this week.