After we launched the Rejuvenation of the Wilderness, the community supplied us with a lot of feedback on content that we needed to tweak. So without further adieu, here is this week's update!

Recharge dragonstone jewellery at the Fountain of Rune: 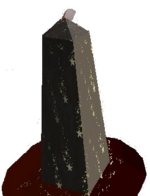 Activate teleports for the Ring of Wealth at the Fountain of Rune:

If you use the Ring of Wealth on the Fountain of Rune it will be charged with 5 teleport charges. You will be able to teleport to Miscellania, Varrock town square, Falador Park and to Dondakan in the Keldagrim mine.

The Red chinchompas in the wilderness have evolved into Black chinchompas! These chinchompas require 73 hunter to catch and 65 ranged to use and are more volatile than their carnivorous counterparts

Piles, a fan of Niles, Miles & Giles, has opened for business at the Resource Area in the Wilderness. He'll note any resources you gather there for a mere 50 gp each.

After you chop the log left from a dead ent, you will now be able to receive birds nests as a drop. It not only makes sense because ents are trees, but now you have a chance at receiving better loot from killing them!

Fedora to be dropped by the crazy archaeologist:

Who wouldn't want the crazy archaeologist's fedora? When you kill him, you now have a chance to receive his incredibly dapper hat. This hat is purely cosmetic and tradeable.

We've replaced the dragon axes special attack with an ability that will temporarily increase your woodcutting level by 3. This brings it up to par with the dragon pickaxe's special attack and allows both tools to be more beneficial to skillers.

God dragonhide armour and God rune armour, which are acquired from clue scrolls, now have a prayer bonus of +1 per item.

Join us on on Twitch TV at 5pm GMT for our regular Developer Q&A.