Whilst all of the necessary detail will be included in the weekly update news post, we wanted to make sure you were aware well in advance of what was happening, especially with the Revenant Caves.

Before moving on to the main topic of discussion, here's a quick update on the fantastic progress the graphics team are making with the newly designed Mage Arena II Bosses! 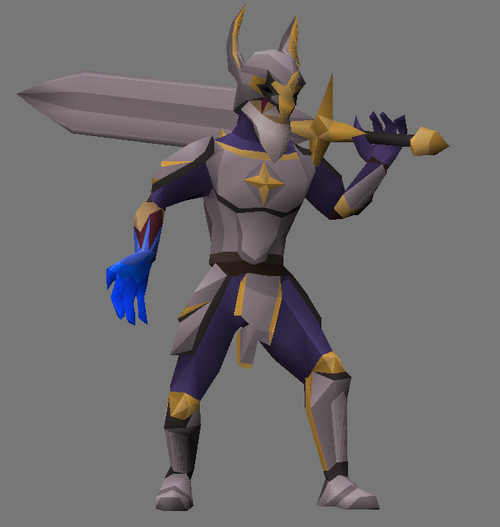 This is the Saradomin Knight boss, designed by Mod West!
Revenant Caves Changes

If you've read the aforementioned restrospective post you'll have noticed we had initially wanted to explore a redesign of the appearance of the Revenant NPCs. We did fully investigate whether this was possible and were able to conclude that the work involved would consume approximately 7 weeks of dedicated graphics time due to the sheer amount of work involved to prepare the custom animations for so many different types of Revenant.

We understand some of you weren't impressed by the Revenants we launched, but we honestly don't feel that amount of graphics time is warranted for the benefit it would bring, especially given the number of other requests for the artists' time too which will undoubtedly increase with the upcoming QoL month.

Drop Table Changes
When we polled the Revenant caves, we stated in the blog that players willing to spend their time within the caves could expect to earn on average, up to 2m GP per hour. As it stands, the current gp/hr rate is far short of this, and so next week we’ll be updating the Revenant drop tables with the following changes:

These changes mean that, on average, you should expect to receive around 2m/hr. We are open to replacing the Statuettes in the future if unique rewards can be agreed upon, and we encourage you all to send in suggestions for new rewards in this forum thread, or on Reddit (/r/2007scape/ and /r/oldschoolrs/).

It's very important to be clear. We are certainly looking for unique rewards, but ultimately without them, the drop table will remain as per the above. We'll be looking to poll any uniques with an intention to have them added in-game by March.

This worked rather successfully, and so we'll look to repeat it this time around. The format will be as follows:

The first poll blog will be going live next week (potentially Monday 29th of January), so ensure you head over to the Old School Content Suggestions forum or Reddit (/r/2007scape/ and /r/oldschoolrs/) to share your suggestions!

There will then be a poll going live in-game shortly after (potentially Wednesday 31st of January) and the content will be released with the following week's update. This is the schedule we will be following for the next 4 weeks, leading to the final pieces of content being included as part of the game update on 1st of March.