Update:Will you wake up from the Nightmare Zone?

The specialist Old School development team has worked with the community to release the first brand new content for Old School Runescape. True to the fundamental principles of Old School, the content was designed in consultation with the community and then voted on and approved by the players themselves. We hope to bring more nostalgia to Old School RuneScape as Nightmare Zone combines prominent bosses with brand new gameplay aspects in a fun and challenging arena.

Dominic Onion, who resides north of Yanille, holds the secret to allowing you to visit quest bosses that you have already defeated in your dreams. Dominic also has the skill to allow you to invite your friends to join you in your dreams. 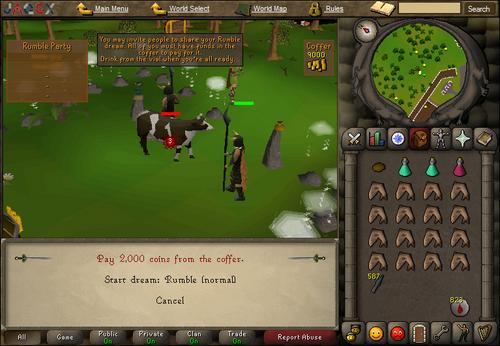 In the Nightmare Zone, you can fight bosses in Practice mode, Endurance mode and Rumble mode.

Practice mode allows you to choose which boss you want to fight so you can whale on them until your heart is content.

In Endurance mode you first need to choose if you want to fight the bosses in normal mode or hard mode. In hard mode, all the bosses are more difficult to fight (have you ever tried taking on a level 292 Black Demon?) but the rewards are better. As you defeat a boss another will spawn and the further you get in endurance mode, the more points you will get which you will be able to redeem in the reward chest.

If you have ever wanted the challenge of fighting multiple bosses, then Rumble mode is for you. Get up to four of your friends and see if you can work as a team to defeat multiple bosses attacking you at the same time. When you see Barrelchest, Flambeed, Kamil and the Dagganoth Mother heading for you, you know you are in for a hard time.

For the foolhardy adventurers who are looking for the biggest challenge possible, then rumble mode also has a hard mode  how long will you survive?

... with thanks to Mod Oliver and everyone else who's helped create this update.