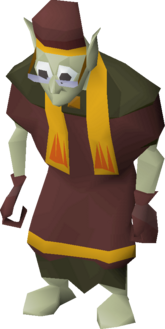 He can be found in northern Dorgesh-Kaan, in the upstairs section.

Like most cave goblins, he is very cautious when dealing with surface dwellers. In fact, after Humans Against Monsters first attacked Dorgesh-Kaan, he nearly sealed the city away from the outside world forever. Despite this, he eventually allowed the city to be opened.