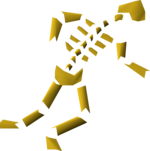 Urium remains are an item found and used in the Shades of Mort'ton minigame. To obtain these remains, the player must kill an Urium Shade, located behind the gold door in the Shade Catacombs.

Urium remains will always reward the player with a gold shade key, or some coins. Gold keys give unrestricted access to all areas of the shade tombs and opens the gold chests in the Urium area of the tombs, which give the best rewards out of all the chests.

For an exhaustive list of all known sources for this item, see here (include RDT).
Retrieved from ‘https://oldschool.runescape.wiki/w/Urium_remains?oldid=14258986’
Categories:
Hidden categories: