Artisan was a proposed skill developed and polled over the course of 2014. Often described as "slayer for skilling", Artisan would have tasked players with gathering and crafting specific items depending on assignments given out by Artisan masters.

The skill was proposed and developed over the course of four developor blogs:

The skill was polled to be added to the game in two separate polls:

Much like the Slayer skill that inspired it, to train Artisan a player would have started by talking to an Artisan master. The master would have given the player an assignment to either gather resources or craft resources into new items. Doing those assignments would have earned Artisan experience along with the experience the assigned activity would usually give.

Much like Slayer masters, Artisan would have had a number of NPCs in charge of giving the player various assignments in order to train the skill. Five Artisan masters were planned, each focusing on a different level range and assignment difficulty. The proposed level ranges were: 1-29, 30-49, 50-64, 65-74, and 75+.

Each Artisan master would have also granted access to a new resource area, containing unique new resources alongside regular resources.

With a "gathering assignment", the Artisan master would have told a player to collect a specific resource through skills such as Mining, Woodcutting, Fishing, or Hunter. Artisan experience would have been rewarded at the end of the assignment, when the player returned to the master. The proposed items to gather, divided by master, were as follows. Items in bold were new additions, unique to the Artisan skill.

Alongside many familiar resources, these proposed assigments also included a number of new resources, to be added alongside the Artisan skill. The skill requirements for these new additions were as follows: 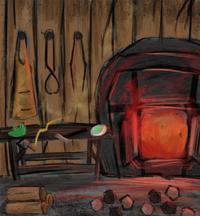 Concept art of an Artisan workshop.

Crafting assigments would have been completed in specific "Artisan workshops", associated with the various Artisan masters. With the proper Artisan level, the player would gain access to the masters' workshops, allowing them to complete the crafting assignments. Alternatively, the player could use Construction to create their own Artisan workshop in their Player-owned house.

Much like the Slayer reward point system, completing Artisan assignments would have rewarded the player with "Artisan points" with various uses. Artisan points were proposed to have the following uses:

Artisan crafting assignments would have offered a number of new ways to create new items. Many of these crafting methods combined multiple skills, such as fish fillets using both Cooking and Herblore to create new food items.

Fish fillets were a proposed type of food item that would use Cooking and Herblore to create food with special effects. The process would have used a raw fish and an herb, with the resulting fillet healing as much as the cooked fish and giving a chance for a potion-like boost depending on the herb used. For example, a fillet made with a raw shark and a toadflax would heal 20 hitpoints like a regular shark, and also give a chance to temporarily boost the player's Agility level by 2 (similar to the Agility potion, which Toadflax is an ingredient in). The proposed effects of each herb, along with the Artisan and Herblore levels required to use them in a fillet, were as follows:

Carvings were proposed neck slot items that would have been made using Crafting. They would have been carved out of ore, and when worn, would have given a chance of mining an extra ore from the next 28 rocks mined of that ore type. Each carving had proposed Artisan and Crafting levels required to make them, as well as a required Mining level to use it, as follows:

Totems were proposed as a combination of Crafting, Woodcutting, and Firemaking. An assignment to create a totem would have involved crafting it out of various logs, with the amount of logs required dependent on their quality. Burning the totem would have given a temporary beneficial effect. The various proposed totems as well as the Artisan, Crafting, and Firemaking levels required to make and use them are as follows: 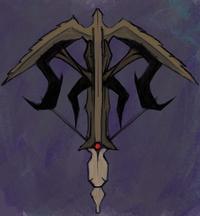 Slow burners were a proposed combination of Firemaking and Herblore, which would have used ground up Coal added to various logs to creater longer-lasting fires with a lower chance of burning food. Higher tiers of slow burners would have required more finely ground coal powder, with more coal needed for better logs. The different tiers of slow burners, along with the levels and and amount of coal necessary to make them, were proposed as follows: 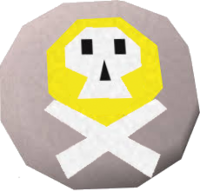 Concept art of a Doom rune, a proposed combination of a Chaos rune and a Death rune.

A number of Artisan-specific combination runes were proposed as an addition to the Runecraft skill. These would have had the functionality of two or more types of runes in a single inventory spot, much like how existing elemental combination runes (such as Dust runes) combine two elemental runes into one. These runes would have been crafted at a specific "Artisan Runecraft altar". The proposed runes, as well as the Artisan level, Runecraft level, and Pure essence needed to make them, were as follows:

Artisan would have provided a way to make shortcuts around the world with the Construction skill. These shortcuts would have degraded over time, with their durability tied to the quality of materials used to build them. The proposed shortcuts along with the requirements to make them were as follows:

Warding would have added a number of new clothing items with unique effects, along with new Farming crops to get the materials to make them. Spinning the crops into ingredients to use in making the clothing would have rewarded Crafting experience. The proposed new crops were as follows:

These new materials, along with existing clothing materials such as furs from Hunter, would have been used to make new clothing items with the Artisan skill. Unlike most other new Artisan items, making clothing would not have required the player to be on a specific Artisan assignment to do so. The proposed new clothing items and their effects were as follows:

Though Artisan failed to pass a poll, its influences can be seen in many parts of the game today. Over the years, a number of features originally proposed as parts of Artisan have been added to the game or otherwise polled as parts of different proposed updates.