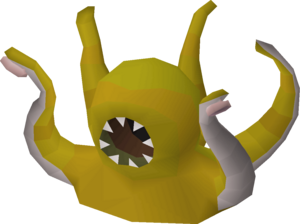 The Kraken is a stronger and larger version of the cave kraken. It requires level 87 Slayer to kill. Located at the Kraken Cove, it can only be attacked if the player has cave krakens as a Slayer task, which also requires level 50 Magic. In addition to its non-boss variants, it is the only monster that drops the Trident of the seas and Kraken tentacle. 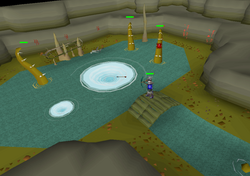 Players must disturb the four smaller whirlpools before they can successfully release the Kraken.

Like its smaller brethren, the Kraken is submerged underwater. To start the fight, the four whirlpools around it must be disturbed; this will release a level 112 Enormous Tentacle, which attacks with Magic. When all four whirlpools are disturbed, the larger one can be disturbed, which will result in the Kraken popping out. Both the Kraken and its tentacles attack with magic; the Kraken can hit very hard, but often misses, while the tentacles are much more accurate but deal less damage. The Kraken and its tentacles use Typeless Magic and as such Protect from Magic does not prevent or reduce any damage they deal to the player (nor does it reduce their accuracy). The Kraken's projectile resembles Fire Wave.

Players can create a Kraken instance for 25,000 coins. The player does not need to carry coins on them to create the instance. The player does need to be careful in the instance though, as it only holds one player (the creator), and any items you drop will be permanently lost upon exiting, including those if you die or disconnect. Also if you log out after paying the coins, you will be kicked out of the boss room and will have to pay again. Items intentionally dropped on the floor within the Kraken boss instance will remain on the floor for 30 minutes; however, items are still lost on death. Items dropped in the regular cave will disappear as normal.