The Nightmare Zone is a combat-based minigame that is located north of Yanille, northwest of the bank. The minigame involves players having "dreams" to fight bosses they have fought before in quests. It is run by Dominic Onion, who is a mage from Lunar Isle. This minigame is safe, meaning you will not lose items on death; however, any items you drop manually on the ground will be lost if you die, as you will be taken away from the arena.

Dominic did not plan on calling his business the Nightmare Zone; it was what the local folk have been calling it. The plan came to him in a vivid dream when he was younger where he saw himself running a successful business from a great structure. He told his father about it, who laughed and said he should be a banker like his ancestors. He refused and wanted to find out what that dream meant, so he studied to find out more about Magic, particularly oneiromancy and dream interpretation. Once he had learned enough, he left Lunar Isle attempting to find the location where he built the huge tower. Since he had not found it or gathered enough money for its construction, he decided to set up a small business north of Yanille selling dreams to people.

To begin the game, the player must complete at least five quests required to access the minigame: 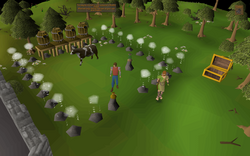 The minigame requires coins to be put into the coffer. Coins can be deposited into and withdrawn from the coffer in multiples of 1000, to a maximum of 262,143,000 coins. The amount of coins needed for each mode varies according to the type of mode respectively: 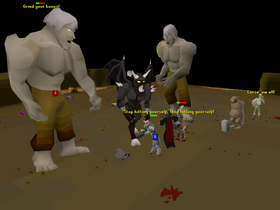 Two players participating in a rumble.

There are 3 modes of play in Nightmare Zone as follows: practice, endurance, and rumble.

All modes have a 'Normal' or 'Hard' difficulty which can be applied.

Once the player chooses a mode to participate in, money is deducted from the coffer, and Dominic prepares the dream potion on a plinth, which when drank will bring you into the Nightmare Zone arena. Those who wish to spectate can drink the spectator potion and enter the name of the player whom they wish to spectate.

You do not need to bring the required quest items needed to finish off bosses; for example, the Black Knight Titan will die without the use of excalibur, and items such as magic secateurs will be provided for Tanglefoot and an anti-dragon shield for Elvarg, and runes will be provided for Chronozon and the Dagannoth mother. All items provided this way have "(nz)" at the end of their names, indicating that they will disappear if taken out of the Nightmare Zone. Magic experience from casting spells by using "(nz)" runes is heavily reduced (This does not apply to the magic experience received from dealing damage.)

NOTE If you log out inside the arena you will log in outside of the Dream World.

Players can select a single boss which you have previously defeated in a quest to fight 1-on-1 until either boss or player dies. No experience is given and no Nightmare Zone points will be awarded for defeating the boss. Drops, such as Dragon Bones from Elvarg, WILL be awarded on defeat of the boss.

Fighting every boss the player has unlocked 1-on-1 in waves until the player either dies or defeats all bosses available, gaining Points for each boss defeated (see Points Awarded in the 'Bosses' section below).

This mode allows you (or a group of friends) to fight multiple randomly generated bosses at once. When you kill any single boss another one will spawn in its place endlessly until the player dies. This mode requires all players in the group to have the coins required for participating. Bosses encountered in a rumble are those that all players in the group can access. Reward points are rewarded for boss kills (points split between teams, see 'Bosses' section Note). 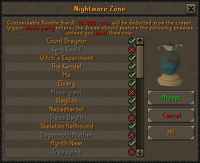 The interface for customisable rumble dreams.

It can last six hours in rumble mode if you don't die within it.

As of 10 March 2016, players can select their own set of bosses within the dream by selecting the customisable options after selecting Rumble mode. Customisable dreams require 22,000 coins for normal mode, and 26,000 coins for hard mode. Players who have the maximum amount of quest points will have the cost reduced by 10,000 coins. However, points obtained within customisable rumbles are reduced compared to that of regular rumbles, depending on how many bosses you remove. Having another player who has fewer quests completed host the rumble does not increase points gained. 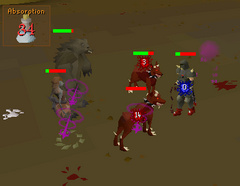 A player using the Zapper power-up in Rumble mode.

In Rumble mode, there are power-ups that spawn somewhere in the arena randomly and gives a player a temporary advantage against the bosses within the arena. There are four power-ups, each with an individual colour denoting its use:

Power-ups disappear if they are not activated within 1 minute.

Some monsters fought within the Nightmare Zone have the ability to provide slayer experience when killed on task. These monsters are easier to kill than their normal counterparts because of the ability to use Overloads and Absorption Potions. However, in order to start an instance a player must select at least five different bosses to reface. This limits the amount of experience dramatically but still allows for a much more AFK alternative for some monsters. In order to maximize slayer experience points it is recommended to use other bosses that are easy and quick to kill such as Count Draynor, and Trapped Soul. The use of ALL powerups is recommended, including Ultimate force. If at least one point of damage is done to a monster that is accepted as a slayer task, full slayer experience will still be given.

The following table details the list of monsters that can be encountered within the Nightmare Zone; the more quests a player has completed, the more a player has access to. In Rumble mode, the only bosses that appear are those that all participating players have access to.

Note: Point values increase based on the number of bosses included. These points are the maximum points that can be given (assumes ALL quests have been completed and ALL bosses included, not just those required for bosses below). If you are in a team, points are split between those who attacked the monster. The person who did the most damage will take a larger percentage of the maximum points from that monster.
Also of note is that many bosses provide an increased Experience amount per damage dealt, such as Dad, Moss Guardian, Arrg, Slagilith*, and the Ice Troll King.

The rewards for the Nightmare Zone are contained in a chest near Dominic Onion, and the rewards are split into three categories: Resources, Upgrades, and Benefits. These rewards can be purchased using Reward points obtained inside the minigame. A maximum of 2,147,483,647 points may be stored in the chest at once. 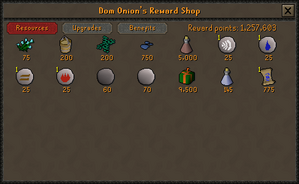 The rewards for participating in the Nightmare Zone.

Resources include certain Herblore ingredients, elemental runes, and items that are only obtainable via the minigame, such as scrolls of redirection.

Note: The only item Ironman mode accounts may buy from the resources tab of the shop are scrolls of redirection.

*All players can only purchase 15 herb boxes per day.

Imbuing it will add an (i) to its name and will have an "Uncharge" option. The uncharge option removes the imbued bonus, and will refund 80% of the points back.

To get all the possible imbues you would need a total of 7,885,000 reward points.

A player uses an overload potion.

Benefits include certain potions that can only be used within the minigame. Dominic's potions are sold by the dose. When you purchase a dose, it is automatically stored in the barrels until the player withdraws them. All Nightmare Zone potions, excluding overloads due to the damage dealt, can be drank extremely quickly, and like combo foods, you can actually drink 28 absorptions at the speed of cleaning an inventory of herbs, by clicking on them one by one, this can also be done with food/other potions with Nightmare Zone potions, without delaying any hits.