Pathfinding is the process of calculating which path of game squares (after this point referred to as 'tile') a player or NPC should move to get to its desired destination. This process happens whenever a player or NPC attempts to walk, run, or interact with a different player, different NPC, or an object in the world.

Whether a tile can be reached from another depends on the blockage properties of both the tiles. These blockages can occur in a number of combinations, but there are four main types.

In order to start pathfinding towards a destination, the destination must be considered reachable. Being reachable may sound straightforward, but a couple conditions have to be met:

Pathfinding itself is executed via an algorithm called Breadth-first search and prioritizes the shortest full path. 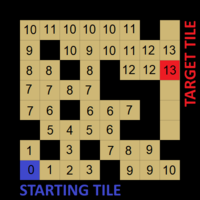 An example of Breadth-First Search. The numbers represent the amount of steps required to reach each tile.

At this point, calculating possible paths is finished, and the options are walked through step-by-step. Beginning at the starting tile, a path towards the next tile is checked in the following order to determine which way to continue:

This process is repeated alongside the calculated possible paths. When the target tile is reached, pathfinding is complete, and the path that was hypothetically travelled is chosen.

Additionally, when there is only one checkpoint tile left in the path and the target has moved, the path is recalculated starting from the current tile. Since this does not happen every tick, it may cause players to run past their target if it has moved significantly before the re-calculation.

Finally, if the player chose the 'Follow' option on another player and there is only 1 checkpoint tile left in the path, they will enter 'Follow mode'. In this state, each path only consists of a single checkpoint tile: The last tile the followed player walked over. This often causes players to get stuck behind obstacles when following at large distances. Follow mode continues until the player cancels it by triggering a new round of pathfinding.