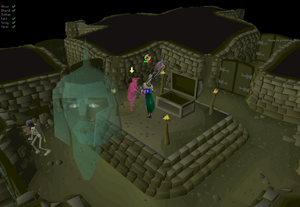 A player participating in the Barrows minigame.

The Barrows minigame is an area-based Combat minigame released on 9 May 2005. The objective is to defeat the six Barrows brothers. Priest in Peril is required as the minigame is located in Morytania, and starting Nature Spirit is required to enter the Mort Myre Swamp. It is a popular money-making method due to the potential of receiving valuable rewards, including the unique Barrows equipment. 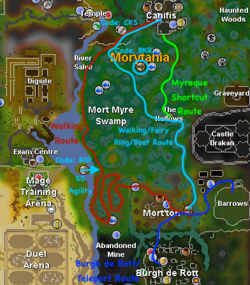 1.) Red is the longest and most tedious route.
2.) Sky blue is the moderate route if no additional quests are completed aside from In Aid of the Myreque. Those who have access to fairy rings can also use this route.
3.) Green is the penultimate shortest route and makes use of the Myreque shortcut.
4.) Dark blue is the shortest route making use of Morytania legs 3, 4, or Mort'ton teleports.

There are several different methods for travelling to Barrows. In approximate order from most to least convenient: 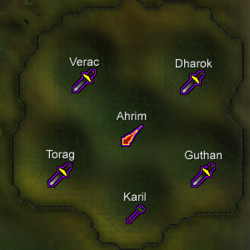 The location of each brother and their combat style.

The tunnels containing the final brother and the reward chest.

The objective of the game is to defeat the six Barrows brothers: Ahrim the Blighted, Dharok the Wretched, Guthan the Infested, Karil the Tainted, Torag the Corrupted and Verac the Defiled. In the first phase of the minigame, the player summons and defeats five of the six brothers. In the second phase, one must traverse the maze in the tunnels to find the final brother and the reward chest.

This minigame is difficult for players with low combat stats. The combat levels of each brother is 115, except for Ahrim the Blighted and Karil the Tainted, which are level 98. The Barrows brothers are very strong, each with high Defence levels and strong armour. Each brother has a different special ability, which is the same as the set effect of the corresponding armour set. Because of this, special consideration should be given to the methods with and order in which the brothers are killed. 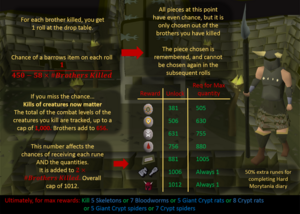 Players receive one roll at the rewards table for each brother killed. For each roll, first the Barrows formula is used to determine whether a Barrows item will be given; if the roll is unsuccessful, the standard item formula is used instead.

Completion of the Hard Morytania Diary increases the number of runes gained by 50% when they are rolled.

Defeating as many brothers as possible before looting the chest is recommended, since not only does one receive more rolls for rewards as the number of brothers killed decreases, but for each roll one also has a higher chance of receiving a Barrows item. If no brothers are killed, it is impossible to gain Barrows items as a reward. The following table demonstrates the exact odds:

is the number of brothers killed.

If a roll for a Barrows item was not successful, the standard item table is rolled instead.

First, the ``rewards potential`` or ``RP`` is calculated with the following formula:

. In other words, it is the sum of all the combat levels of monsters killed (including the brothers, which in total have a combined sum of 656), up to 1000, plus two times the number of brothers killed. The maximum RP possible is 1012. The combat levels of the brothers is included in this calculation, and since the six brothers have a combined sum of 656, an additional 344 points must be gained in order to gain the maximum number of points.

A roll is performed for a value between and the ``RP`` calculated (each inclusive). This value determines the items awarded and the quantity by using the table below:

As shown in the table, each item has a range, and the higher in the range the roll resides the more of the item. For example, a roll of 1 and 380 would both result in a reward of coins, but the latter would result in more coins.

If players wish to receive more runes (which are generally worth more gold) instead of bolt racks and key halves, they should keep the total combat level of the monsters killed around but no more than 880. Having exactly 880 would allow the maximum number of Blood runes, but would remove Bolt racks, key halves, and the Dragon med helm from the drop table. Players can achieve exactly 880 points by killing the six brothers and 3 Skeletons. It could also be done by killing 4 Crypt spiders, however these are confined to one room and also share space with their larger cousins, making this method much less convenient.

Calculations assume all 6 brothers are killed for each chest. Only "One random set" is an approximation, the average of 5 million simulations. Where for example "5 unique items" means you have 19/24 items and you need 5 more unique items to complete all sets.