Due to the amount of movement involved in fighting the Alchemical Hydra, it is highly discouraged to use melee. Additionally, as it has a fairly high Magic level and low Ranged Defence, Magic is much less optimal as an option compared to Ranged to combat the boss.

The fight is instanced; if players die while fighting the Hydra, then they may reclaim their items from Orrvor quo Maten outside for 100,000 coins each. Dying elsewhere with items still with him will result in them being lost forever!

The Alchemical Hydra uses both ranged and magic attacks against players. It changes its attack style after every three attacks regardless if they hit or not. The magic attacks consist of two small green projectiles, while the ranged attacks are fanged projectiles.

The side heads of the Hydra are the ones that primarily attack the player; the middle does not attack players at all. The left heads attack with ranged, while the right heads attack with magic. As such, during the first two phases respectively for each side, the Hydra's attacks instead hit twice, with a maximum hit of around 17 each. When the bottom heads fall off, the Hydra's attacks for that side is reduced to a single hit which deals more damage.

The Hydra has a high Magic and Ranged level, as it uses those two combat styles as its primary attacks. Its Defence and resistance to stab and ranged attacks are extremely low, so neither a Bandos godsword or Dragon warhammer are required for the fight. Melee can be used on the Hydra, but it is highly recommended to range it due to its mechanics.

At the start of each phase, the Hydra performs three auto-attacks before performing a special attack. Phase transitions do not alter its attack pattern. 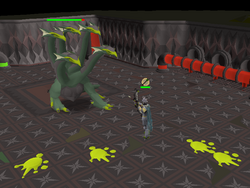 In this phase, the hydra starts with a green carapace, and should be lured to the red chemical pool.

After the first three attacks, The Alchemical Hydra will launch 4 or 5 poison blobs around the player's location. These blobs target the player in a 3x3 AoE, and continuing to stand on them will deal up to 12 damage per tick. These blobs have a short travel time, so if the player begins running as they are fired, it is possible to avoid their damage completely. The poison is fairly weak, but it is recommended to clear its aftereffects immediately.

Once the Hydra reaches 75% of its health, the bottom-right heads falls off and it changes its carapace to blue. 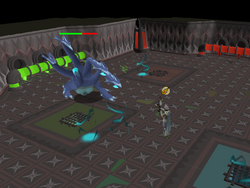 Throughout the phase, the Hydra can launch four electrical projectiles around the room. The lightning always spawns in the same areas, but the order in which they appear varies each kill. The four pieces of lightning converge on the player's location. Getting hit by them will bind the player and deal up to 20 damage. It is not possible to tile skip to avoid them. Starting near the middle of the room and looping around one of the last lightning spawns, to escape the box they form, is the easiest way to avoid their damage. Players may also hug the northern wall and quickly move their way west while damaging the Hydra, which works especially well with a twisted bow due to its attack range and ability to avoid the lightning with ease.

Once the Hydra reaches 50% of its health, the bottom-left head falls off and it changes its carapace to red.

Note: If the Hydra transitions to the next phase while there is lightning on the field, they will dissipate immediately. 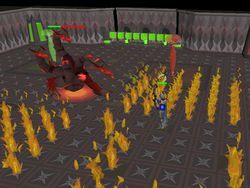 Throughout the phase, the Hydra will occasionally walk to the centre of the chamber and face the direction the player is at. Once it reaches the centre, the player is stunned, but they can still attack the Hydra. If the player is underneath the Hydra, then it forces them out into a random direction. Upon reaching the centre, it breathes 5x5 layer of fire to the player's sides based on their location before staring down the middle and launching a tracking fire. This tracking fire follows the player's movement, and travels significantly faster the further the player is (or if they start running). Getting hit by any of the fires will result in the player taking up to 20 damage, followed by a subsequent bleed of 5 damage for five hits. Moving onto another fire resets the bleed. Fires may be tile skipped, though it's only recommended to do so after the tracking fire stops. The Hydra does not attack until four seconds after the tracking fire is sent out.

Once the Hydra reaches 25% of its health, the middle head falls off and it changes its carapace to gray.

Note: If the Hydra transitions to the next phase while performing this attack, it ends abruptly. This also includes the tracking fire, but any fires started before the phase transition will still persist as usual. 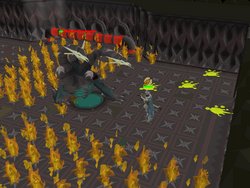 There is no counter to the gray carapace; do not lure it to any of the chemical pools for this phase. As such, it does not need to be lured as its damage reduction ability does not reset.

The Hydra starts off this phase by attacking with the combat style opposite of what it used in the previous phase; if the previous phase ended with a magic attack, then it starts with ranged and vice versa. In addition, the Hydra's damage from its auto-attacks drastically increase, and changes attack styles after every attack it performs, regardless if it hits or not.

It also uses the poison attack from phase 1, though it generally sends one poison blob on the tile it is on; however, it can still use the phase 1 variant of the attack randomly. During this final phase, the poison attack will always happen after 3 normal hydra attacks, then again after another 9. Continually pray flick until the Hydra is killed. It is recommended to keep prayer points up to prevent the possibility of the Hydra landing a hit on the player. If the Hydra is killed just as it sends an attack, it will deal no damage.