NEW: Whenever a player makes a new RuneScape character, it will start out on Tutorial Island. For new players, this is a place to learn the ropes, whilst those creating new characters can begin to fine tune them here. Watch for the map symbols on the minimap, as learning those will help players find their way.

Upon account creation, new players can customise the appearance of their character. This includes their clothes, hair, skin colour and gender. Note that a player's appearance can be later changed after leaving Tutorial Island through Makeover. 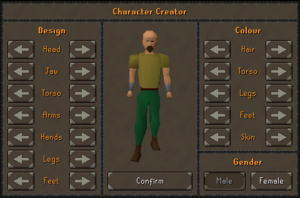 NEW: Upon logging in after account creation, new players can customise the appearance of their character. This includes their gender, skin colour, hair and clothes.

Note that a player's appearance can always be changed again, after leaving Tutorial Island, through Makeover. However, changing hands and feet ...

The Master Chef teaches players the finer points of Cooking; in this case, making bread. At most Cooking levels, items that need to be made offer greater healing than fish, which can be cooked at the same level, but require multiple ingredients. 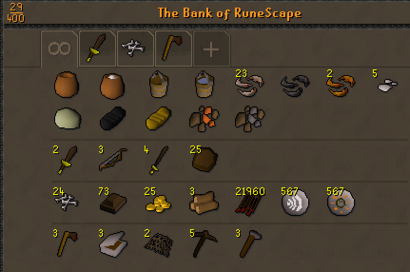