Call of the Wild[edit | edit source]

Call of the Wild is a grandmaster quest set in the Wilderness during the Second Age, prior to Zamorak casting the spell that destroys it. Following a young character who turns to Zaros for vengeance after Zamorakian warriors killed his family, the quest shows the Wilderness’ destruction and history, and how it became the desecrated and soulless location it is today.

The quest takes place in three parts, following the life of a man named Beckett. First, we see Beckett as a child in the 2nd Age. Then, we see him as a member of Zaros' Order. Finally, we see the Wilderness fall, and Beckett asks you to visit locations across the Wilderness with his locket, to see for yourself the battles he once fought in. The third act is done ENTIRELY IN THE WILDERNESS, and although most of the fights are instanced, you will need to bring the gear you use to fight the boss with you through the various Wilderness locations. All you need to begin the quest are the quest and diary requirements. Each section has a summary of the dialogue as well as the actual dialogue hidden below it. 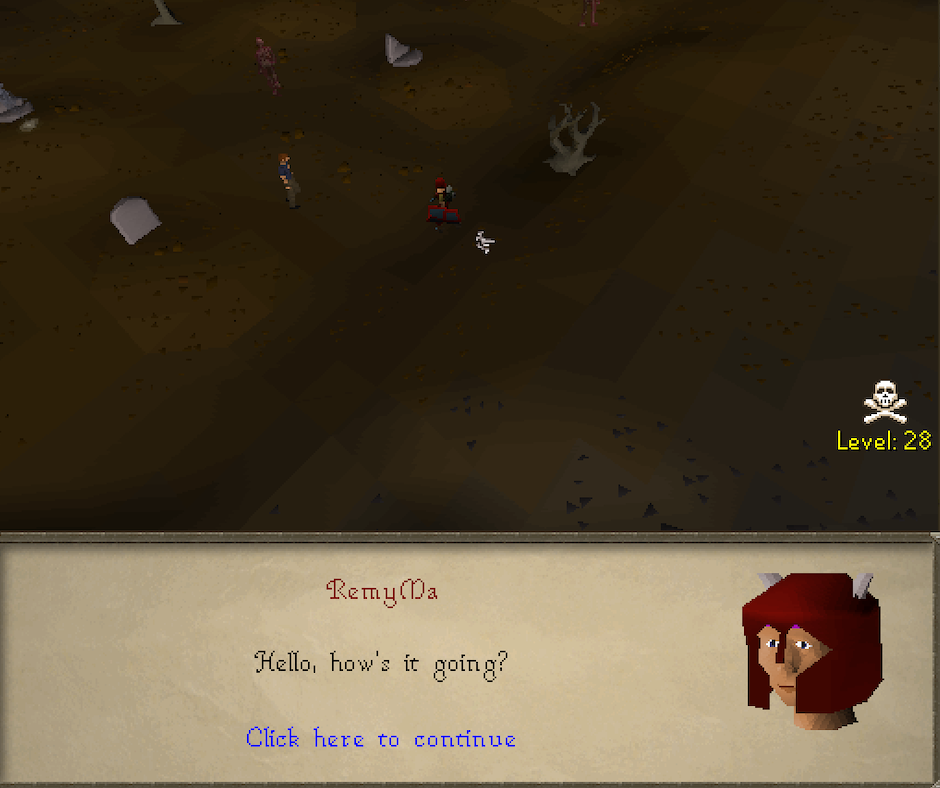 Part One: The Plight of Beckett[edit | edit source]

Begin the quest by talking to the Man in the Forgotten Cemetery.

After rudely asking why a "normal" person is wandering the Wilderness when all of RuneScape knows it to be a place of evil, he'll reply that it once wasn't this way, and that he roams the lands seeking the spark of life still left in Forinthry, hoping to return it to its once beautiful state. After trying to boast that you've seen even greater adventures (such as those faced in Dragon Slayer II, Recipe for Disaster, and others), he replies that he lived through the God Wars, to which you admit that he's got you beaten. When asked to share his tales, he says merely speaking the history wouldn't do it justice, and that he'll have to show you. Agree to start the quest, and he'll tell you to meet him in the caves of Edgeville.

Head to Edgeville, near the canoe station, and talk to the man again (he'll now be labeled Wise Man). He'll instruct you to go with him into a cave under the water. Chop down the tree, and on the canoe option menu select skinny waka canoe. You will need 70 Woodcutting to complete this step. 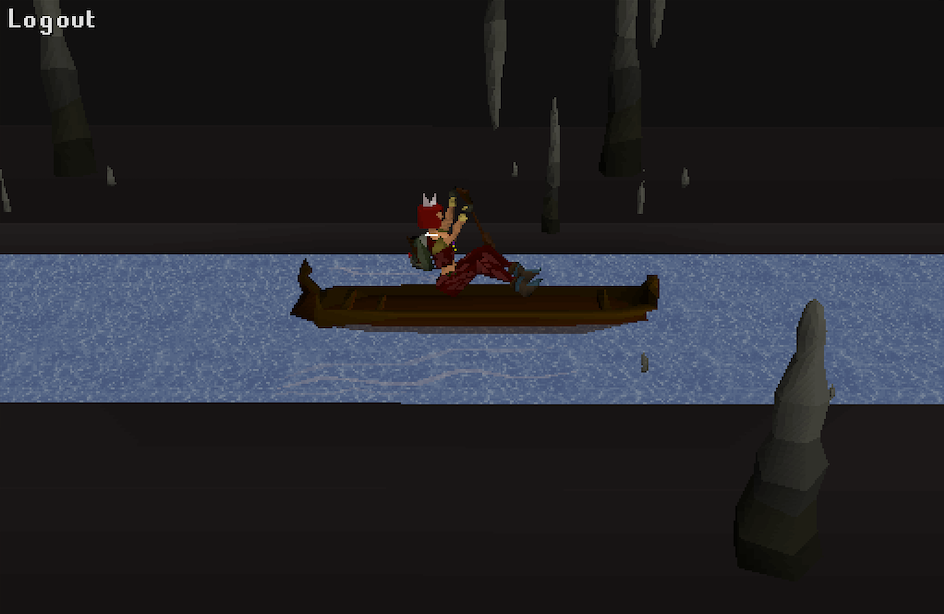 Take the canoe to the location marked Dim cave. The man will be inside. Talk to him again and he will introduce himself as Beckett, and say that in order to truly experience his memories, you'll need his courage, his magic power, and his conscience. In his old age, he also wants to make sure he's remembering perfectly. Finally, he needs the essence of the lands he travelled. As such, he'll only be able to accurately show the tale to you with a Vivid Dream potion, which he will explain how to make.

He'll tell you to combine the following potions:

Once you have all six potions, use them on the stone basin in the center of the cave. You will need 70 Herblore to complete this step. You're now ready to begin the first part of the quest.

Drink from the basin when ready, and a series of cutscenes will begin.

*Cutscene one: Beckett's resting on a stone in a leafy, natural area, writing on a note with quill. After a few seconds, the view changes to him walking down the hill into what’s now the Odd Old Man’s house, but the area is surrounded by forestry. The chatbox begins to display text.*

*Clip of Viggora killing Beckett's mother at the farm in Morytania*

*Clip of the sun going down, then coming back up, to display another letter in the chatbox.*

*Clip of Viggora's men attacking innocent people in their homes.*

For this section, you will be playing as Beckett, in a differently looking Morytania. Following the path shortly north, there will be a small cluster of three cottages, burning, with four level 89 Corrupt Zarosians around them attacking the villagers, who you will have to face without prayer or food, just runes for 20 casts of Wind Strike in your inventory. While it's possible to take them all out with melee combat (they each have 50 hitpoints), and the damage you do is based on your actual combat stats, the Zarosians have high accuracy with their melee attacks and can easily kill you without armour. As such, you'll need to use the Wind Strikes to lure them towards you and over the nettles patches, which will slowly hit them for 1's. Once all six are dead, speak to the villagers to learn that Viggora paid off several humans in a nearby settlement to take over houses close to them to set up a base, and you will be brought back to the present time, where you will say you've met Viggora, and Beckett will explain that followers of Zaros became obsessed with power and ultimately turned to Zamorak. He'll discuss the ways in which Zaros' ideology failed humans at the time.

*Cutscene showing another letter being written.*

-----For this part of the quest, you will be living in Senntisten. I need to flush this part out more, but basically, you're playing as Beckett and are at this point in time a rookie in Zaros' ranks. You will be completing tasks asks by civilians in the area. the goal of this part of more so to expand on the lore of the time than anything else. tasks will be pretty simple, such as run a series of letters, cook a specific meal with ingredients found around the area, etc. There will be dozens of civilians, so any of them can be talked to to get a random task. the five tasks will end up being the same. this section will probably take about 10-15 minutes.----- rookie/major/lieutenant/general

After completing five tasks, speak to the Zarosian general in the main building and inform her of your completion. She'll congratulate you and say that you need to prove yourself in a battle, and after that will be eligible for the rank of Major, the first step on the way to becoming a general. You'll get a message saying to prepare; this battle will be fought with your own gear, so use this break to bank and gear up, and return and talk to Beckett when ready.

Note: I have another quest called desert quest that specifically covers the Kharidian-Zarosian war in more detail, shown from the perspective of the Kharidians.

This battle is set during the Kharidian-Zarosian war. You will appear in a desert area, on top of what is now the Shantay Pass. After the quest, this area can be traveled through. A team of Zarosian rookies will be with you, led by one Zarosian General, who will a short speech. After this speech, you will have to fight the level 305 Kharidian Warrior. To equip the Zarosian Chestplate in the scene will require 70 Defence.

The Kharidian General is level 305, must be attacked with Melee only. His archers will shoot arrows out of the air before they hit him, and your Magic level will be consistently drained to 5 every two seconds. For this reason, Melee combat is the only way to defeat him. He is weak to crush, and has 300 Hitpoints, and attacks with two combat styles, Ranged and Melee. Every 8 attacks he will spin around and jump, slamming his feet into the sand and sending waves of sand coming towards you. You must run away before he does this, as the attack will kill you in one hit. It will travel out from him in until it creates a 7x7 pattern, so running four tiles away will suffice to avoid it. Every 10 attacks, he will raise his hands up and invoke the gods, causing tentacles to come out of the sand and strike you for 20 damage. These can be avoided by watching for areas where the sand changes color. During this time, his defense will be lowered. After he is brought to 0 hp, a cutscene will show him on the ground giving you the option to either spare him or kill him. You must kill him, so select kill, and you will be placed back into a fight with him. He now has 50 hp, none of his special attacks, and attacks with rapid, inaccurate melee attacks. Kill him to trigger the next cutscene.

After this you will end up back in Beckett's room. You discuss the impact of the fights he had, and the kills he had to make. He will explain that it allowed him to climb the ranks, and then show you his life as a general. After this, you will have to fight as a General in Paddewwa and Lassar, holding the areas for part of the Zarosian Empire.

future of the quest: the fight at lassar/paddewwa, then the fall of zaros with the spell turning the wilderness barren, then the rest of the stuff being set in the wilderness at various wilderness locations showing them in the past. i wanna have the spell casting be right after the lassar paddewwa fight in a long cutscene / dialogue section showing zaros' fall. i will need to link a skill to each place in the wildy it goes. also wanna incorporate kbd and etc history in there as well. 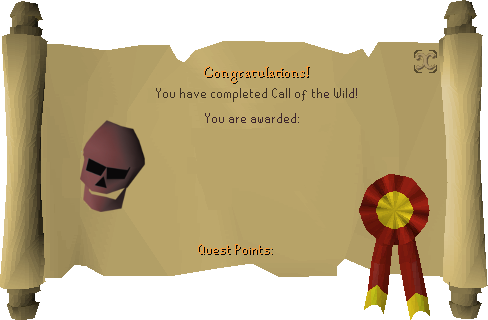 The fish caught are untradeable, skull you, disappear if you teleport, and drop 35,000 gp each on death. While Beckett's rock is not in the Wilderness, allowing fish to be obtained, to get to and from it requires navigating a large multi-combat area with multiple high level enemies. Fish require 68 fishing and include: