Are you using the order from the music list as the basis for track numbers? I'm pretty sure we've been using order of release date, then alphabetical order to determine that. If you're intending to continue, you missed 7th Realm.--

Or, you're using List of music in chronological order. In which case, do carry on. --

Going to be really fun when you get to the ones from The Eyes of Glouphrie. :) --

Because of your involvement with the wiki, you are eligible to vote on the candidates for the board of Weird Gloop, the company that hosts the RuneScape and Old School RuneScape wikis.

There are 4 candidates for OSRSW and 4 candidates for RSW, and 1 candidate for pt-RSW. If you'd like to influence who represents the voices of these communities inside the company, I strongly encourage you to vote! You are one of only 204 people that meet the requirements, and this is your opportunity to help shape the future of the wikis.

Do you want a free wiki t-shirt?[edit source]

To celebrate the two-year anniversary of the new site, we're giving away RuneScape Wiki t-shirts to a bunch of wiki editors. Because of your contributions to the community over the last year, we'd like to send you one! If you're interested, go fill out this form, and we'll get those shipped out before the end of the month.

If you have any questions, shoot me a talk page message or a DM on Discord (Cook#2222). Thanks!

They were all originally added for the Deadman summer finals on 23 June 2018. The warriors have the same appearance as NPCs 8395-8397 who now have no name. As you can see here [2] the NPCs patrolled the arena, while the objects (including the crane, id 33145) could be seen around the outside.

Obviously not a very interesting answer so the question is more why they were brought back. The short answer is I don't know but since they were added with the Ferox Enclave my best guess is that they are meant to be similar to the 3 Zamorakian Acolytes. It's possible that they will be part of a future update since there's a lot of unreleased stuff in the Enclave basement (Stealing Creation lobby, and an unused cave system).

Examining what they are wearing also may give some clues. Although their head and trousers are shared with Corsair Cove NPCs, this is probably irrelevant. Most of what they wear is also worn by NPCs from the Desert. The Scimitar is used by Mercenaries and Guards, while the Shield is only used by the Mercenary Captain. Their hands are shared with two male slaves (also in the Desert Mining Camp). The most interesting one however is their facemasks. It's only worn by 4 other NPCs: the Menaphite Guard, Coenus, one of the Desert Mining Camp Mercenaries, but also a Wizard at the Ferox Enclave.

So I think either they were/are going to be used at the Ferox Enclave, or they would have been at the Citharede Abbey since they have a desert theme, and nearly all Zarosians are now in the desert.Hlwys (talk) 21:26, 8 January 2021 (UTC)

Thanks for looking into it, a bit of a bummer, that there isn't much about them. To put it shortly it would seem that you and I think along the same lines. Thanks for clearing it up. Exaldin (talk) 11:52, 10 January 2021 (UTC)

How would you define "part of the music track," though? The animal sounds play together with the "ordinary" bit every time, and, in particular, the music track that the jingle had interrupted only resumes/restarts *after* the animal sounds are over. So... I don't see the issue. :| Fswe1 (talk) 12:31, 22 February 2021 (UTC)

The animal sounds are not included in the midi file at all, not even as a custom instrument. That's why they don't play in the versions of the tracks uploaded which were directly rendered from the game. The only ones they play on are the Easy jingles, where they are part of the drums track, so they are included. Hlwys (talk) 13:51, 22 February 2021 (UTC)

Okay, so the animals were, for whatever reason, given a separate file in the database. They still accompany the instrumental part in-game; I still see no issue. Fswe1 (talk) 14:59, 22 February 2021 (UTC)

They're a sound effect, not a music track. Tracks from cutscenes don't have the ingame sounds from the cutscene pasted over them, and the jingles from Achievement Diaries shouldn't either. Hlwys (talk) 15:59, 22 February 2021 (UTC)

Sure, but whether it's a music track or a sound effect is just a technical irrelevance, is it not? It's not an ambient in-game sound effect that just happens to be there; it plays together with the jingle at a pre-specified time. At the end of the day, I don't care about the technicalities. Fact is, the two go hand in hand in-game and people might want to hear the full jingle+animal sound irrespective of whether the latter belongs to the midi file or not. There is, at least, no harm. :) Fswe1 (talk) 17:53, 22 February 2021 (UTC)

I'm not sure how much clearer I can make this - the animal sounds are not part of the music track. They never have been. You can download the midi files yourself and see they are not in there. The sound effects are played entirely separately and are just that - sound effects. They should not be included on any page dedicated to music. Possibly they could be added separately, but the music files as they stand are the actual songs extracted from the game. Also, one of the jingles you uploaded includes the sound effect for eating at the start - out of curiosity, do you consider this to be part of the full music track too? Hlwys (talk) 19:12, 22 February 2021 (UTC)

It mentions on the page what most of the areas are. I doubt they will get their own page, instead just a section on the broader page that discusses them. So the Ardougne Sewers image can just have the license as Ardougne Sewers for example Hlwys (talk) 22:42, 18 May 2021 (UTC)

The clan system is being added to OSRS tomorrow, and I wanted to let you know that we're making the OSRS Wiki clan for editors and readers of the wiki. There aren't any requirements to join, but we have cosmetic ranks for people who edit. Due to your contributions to the wiki, you're eligible for the >extremely prestigious<

If you're interested, check out RuneScape:Clan Chat for how to join.

, that's a very useful thing to do (kudos!) but in this particular case (where the difference is only in name; and ID, but readers don't care about that) it seems somewhat excessive, meseemeth. But by all means, continue as deems thee best! Fswe1 (talk) 15:12, 28 August 2021 (UTC)

Writing you here, as I have some serious questions regarding this post I noticed online ‐ and find myself sitting on what is potentially a treasure trove of highly valuable information.

Please connect via discord (tag is on my userpage) so we can chat when you have a moment.

I was thinking of filling out the rest of them one I'm done with the elves. W/r/t to the multiple models issue, I've got a workaround which involves displaying all of them vertically: https://oldschool.runescape.wiki/w/Guard_(Prifddinas)#Gallery_%28historical%29

RE: Do you have any old computers you played RuneScape on?[edit source]

I've made an imgur album to add the ones I have that you're missing. Hopefully I can fill in a few blanks :P

It might take me a while to find more so I'll probably be updating the album for a little while if you still need dates!

RE: Do you have any old computers you played RuneScape on?[edit source]

Ah, Okay! yeah I don't know if I have game file things lol I was just looking for any screenies from dates that were missing on the list. Sadly I couldn't find anything from before like mid-2008, which I'm pretty sure was one of the times I got a new computer so those are probably lost. :(

Hello, bother told me you proche of runescape police. Was said to email jagex but brother say full of spidermare and controlled by big blue. Sorry for bad english, school not good and DSi limited. Sent message runescape discord but brother told me to contact you as friend. Me see in past today two person talking painiting pirate words. Forget to take photo with DSi but noted pseudos. Was called ROU57 and Watcher55. Talking about sumping spotanimes memories. Me bad at clavier so name may be error-ful. Brother told me you friend and not allied with big blue. Brother send you best eyes.

Why did you remove the worn options from the max cape? They are different to the inventory ones. 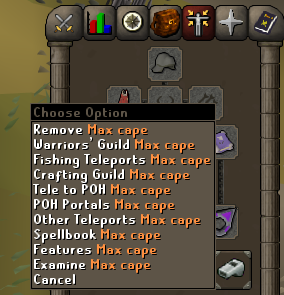