Hey! I noticed this image[1] was kind of poorly done, with an incorrect name. I uploaded a new one and replaced it, but I could not override that one as it wouldn't let me change the name. Could you please delete it for me? --IFarmmy (talk) 02:51, March 25, 2015 (UTC)

Go to Special:Preferences, click on "Editing", and put a check on "Do not show syntax highlighting in Source mode". --

Here's a bank check for your gp. 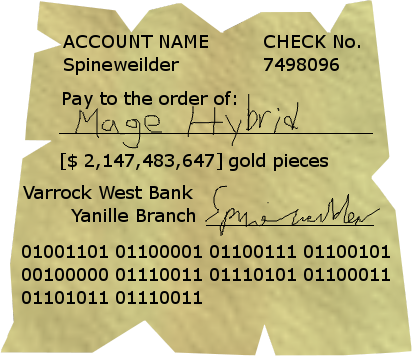 It is totally legit. My signature is there. --

I was hoping to make the main page for Achievement Diaries a bit more informative on the lower level achievements as all that was really there was elite. So I have added those 3 new sections for Easy, Medium and Hard, I was wondering if you could change the name of the last section to "All Elite Requirements" to suit the new sections?

I don't have permission :)

Hey, I really appriciate all the work you and the other guy put on rswiki. I want to do something back, So I started figuring out stuff.

I'm still new, but I'm learning! Thank you for fixing little things behind me. Maybe we could chat ingame maybe? I don't want you to clean up little mistakes I makes. Maybe you can point some out or something, or give some tips. I'm Iron Koning ingame. Thanks!

Looks like February 23 is still the only date so far this year. I'll be expecting my 2 billion back. --

Tried to fix my mistake on your page[edit source]

I'm still new, but I'm learning! Thank you for fixing little things behind me. Maybe we could chat ingame maybe? I don't want you to clean up little mistakes I makes. Maybe you can point some out or something, or give some tips. I'm Iron Koning ingame. Thanks!

Hey, why i cant create a page for some future completionist stuff?

The page i released was just a test, im starting to update it now.

Hey, so I was working on the Grand Exchange/Buying limits page when I suddenly got this message halfway through: This action has been automatically identified as harmful, and therefore disallowed. If you believe your edit was constructive, please inform an administrator of what you were trying to do. A brief description of the abuse rule which your action matched is: Anti-meme

Any idea why this is happening (randomly)? Most of the time I don't receive them, but sometimes I do, while I'm obviously not screwing around. It's pretty annoying to say the least.

It's the Maple longbow that causes this message btw. Therefor I'm also unable to add Maple longbow to the Grand Exchange/Buying limits list. (Instead of F2P Longbows which is a bit unclear.)

Thanks for polishing up my page on the Crystal Ball, however I'd appreciate it if you would refrain from completely butchering my content in the future. I goal to overhaul the Construction portion of this wiki as most of the information is horribly innaccurate, missing, or wrongly labeled from RS-HD/EOC content. Much appreciated.

I've been trying to shorten the pages with broken file links list...For some reason, some of the pages I click on do not have any red links. At first I thought it was just lag and they would get updated in a couple hours or so. But it's been days now and those pages are still there. I'm stumped as to why this is. Do you have any idea? Icejunito talk • contribs 22:05, May 10, 2015 (UTC)

I move it to 1. make is consistent with all the other construction icons and 2. most of detailed construction images on RS3 have "built" or "POH" at the end of each item to distinguish them from its icon form. The detailed demonic throne on RS3 is inconsistent with the rest. Icejunito talk • contribs 00:27, May 18, 2015 (UTC)

Remember when we discussed to just check for any edit made after the last edit I made? I'd like you to just check the edits after the edits of the following users as well: ExpectRS, Icejunito, and Metallicanrana.

I was trying to edit a couple of pages earlier but it was taking very long time for them to save and then a message came up saying 'something went wrong'. I tried this several times and the message still came up. I was wondering whether you could possibly help as you are in the admin list. LordSherbet (talk) 15:23, May 26, 2015 (UTC)

Hey, I'm trying to push a large amount of content to Achievement Diary/All achievements to get the page off the ground. It's being blocked due to "Bad words" and "Anti-meme". Any way you could help me get around this?

I will also have another major content push tomorrow (for non-skill achievements) and then it should be all linking/formatting after that. Thanks in advance.

Just a note that there is a link to a non-existing page (Help:Talk_pages) on the default Wikia welcome template. Probably not ideal for a new user! WK of Angmar (talk) 00:23, July 24, 2015 (UTC)

You are right, and now the link appears blue for me! Though on the page itself it does give you the option to "Create" the page. It seems we are being presented with some sort of default page? I really dislike Wikia, to be frank. Thanks for the response. Regards, WK of Angmar (talk) 01:46, July 24, 2015 (UTC)

Seems like I missed a lot of action :S jet lag sucks, and having reset happen at 8 am here now isn't any better :( --

"refer to the elite reqs and Achievement Diary/All achievements"

That page does not have the information I provided though. It doesn't tell you the absolute minimum reqs needed for each skill. You would have to manually go to each skill section, find the level, figure out if it is boostable, then go to the skill page and "Temporary skill boost" page in hopes of finding a boost method. The table I made is new to the Wikia so I think it should be included somewhere I think.

where the hell is the bad word?[edit source]

Removed the code paste since Spinewielder's edit appears to be the exact thing i was trying to do:

The link is the history comparison and the first two sections appear to be exactly what i was trying to do
but there are three lines listed that i never touched. in fact, the first two lines are exactly the same while the clue macro has the "noinclude" removed from it (which might need to be returned if clue infobox appears twice sometime in the future)

this is disturbing since those two lines that look exactly the same are being flagged as having been totally different.... not one word was located to be used as a reference of equality. this tells me there is some funny buisness going on behind the scenes. I suggest that three Admin's look into this independantly because the worse case senerio is we have an admin that messing with the behind the scenes code. and it doesnt have to be either of you two since the convo was open to public review a third admin could have snuck in and altered a hidden block.... that is worst case senerio

whatever the reason, we really should find out why the history page thinks those two lines that look exactly the same are different Qaz Wiz (talk) 13:05, August 10, 2015 (UTC)