I'm grabbing the images for the fire arrows. The numbers is cutting into the arrows, do you know of a way to grab a picture without the numbers or is that not possible? Shoyrukon (talk) 07:57, May 22, 2014 (UTC)

I attempted to make an inventory template much like the equipment template I made earlier, but it went awry. Since you're an admin, I'd like to request that the following pages be deleted since they don't work. Thank you.

I have some good news and bad news. The good news is I managed to redesign Template:Inventory and its doc, and they work like a charm, so we should only keep those two. RSW 2007 finally has an inventory template that works! The bad news, however, is after messing around to finally get the two to work, I've also re-created the non-working pages listed below. I'd like to again request that the following pages listed below be re-deleted. I thank you again for doing so and putting up with my pestering, and this should be the last. = D

I do not own the bracelet, I was mislead as to the name by zybez when I was trying to buy one. I have reverted all changes made. As to clearing the talk pages, is that not allowed? I just wanted the welcome message gone.

Names of some items ingame

Can you please move them the ones we uploaded to the following:

I tried moving but some already exists. Same for equip.

I have added a catagory of "Examinable Location"

it needs an infobox appropriate to the type. part location and part item that cannot be taken or moved there are many such locations that are a mystery until the player is directed to use the location

I don't know why it isnt working :(

Sorry, it was the map for the hobgoblin island:

under: Maps with an X but no buildings

Please amend the documentation for the item template: Add the members:

and remove value, as it's from RS3 and we don't have it or use it:

There's also a 'quick-copy' at the bottom that doesn't have members.

I am confused. The image I uploaded was on my user profile, like you have an image of your avatar on your profile. I don't understand?

I got new coords from medium clue. Not in the site yet.

Could you add them to wiki so it helps someone.

I personally snapshotted those pictures from in-game, and that's their original size. Thus, they came out like that. You can always click on the pics themselves, and it should blow up to regular size. Nonetheless, I did my best, and that's the best I can do. All in all, it's still better than having no pics at all.

There's already a more accurate and finished page for all armor, so the following is obsolete and should be deleted.

Hello, it's me again Sikalokki, kinda new to this Wiki thing so please welcome and help with stuff

Hey, you asked where did I found bucket (g) 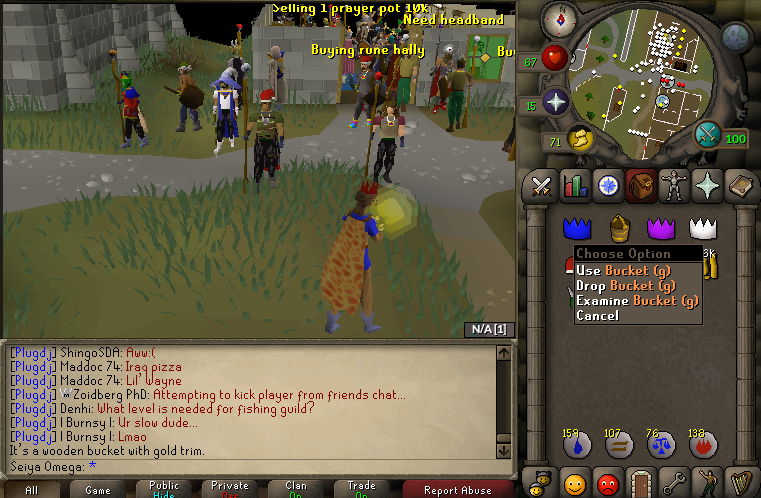 It may be photoshopped/edited picture but I think it will be fixed/updated when someone really gets it :)

Using "you" in the wiki

Hi there, I am not sure where is the best place to ask, but should I replace instances of personal pronouns (such as "you") with "the player", "the user", etc. where applicable? The argument I see against this is that it may make reading instructions easier for a user. For example, "You should bring Falador teleport runes", compared to "the player should bring Falador teleport runes".

Totally unrelated thing but im too lazy to put it in it's own category; Is there an archive for updates added to the game? The newspost section on the main 2007 website doesnt go too far... --

I noticed several errors and botched grammar in the Underground Pass (dungeon) article, so I attempted to edit it. After looking to publish, it claims that there are bad words in said article. The only phrase that would fit that description if any was "sucked down" (Entering the Pass, sec. 2). I changed it to sink down, and it still wouldn't accept my changes. I'm just your friendly, neighborhood Wiki user and editor, and I intend no harm. 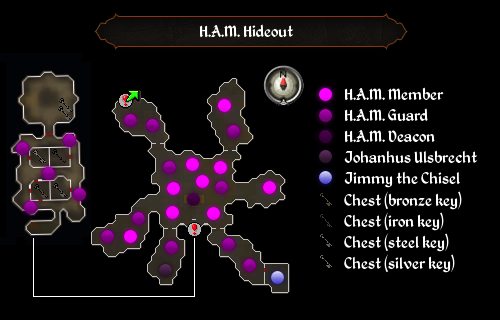 The original file I've uploaded erroneously has H.A.M. Guards labelled as level 44 when they're actually level 22. I deleted the level 44 part in the later files, but it still keeps showing up as level 44 when I uploaded it several times to make the correction. All it did was spam. Please help!

Thank you for letting me know about the bug. At first, I thought it was just me.

I've noticed several errors and botched grammar in the Barrows equipment article, so I attempted to edit it. After looking to publish, it claims that there are bad words in said article. I combed through the article and didn't notice any bad words or vulgarity of any sort. I'm just your friendly, neighborhood Wiki user and editor, and I intend no harm.

File:Barrows Grave.jpg
I accidentally uploaded the above image in jpg format instead or png. Please delete as I already uploaded one in the correct format with better quality. Thanks!

In regards to said matter, I'll be very careful next time. It was late and an oversight on my part as I was trying to do my best to make the article as pristine as it can be before bedtime. As I've already gotten the OK, I'll go ahead and use the image on RS3 then with a bit of polishing.

Aloha!; Just a heads up, i shall be making my return to 07 soon :) As i draw nearer to comp in live, just letting you know i haven't forgotten/still have occasional visits here :D

You should let me right a newspost sometime :) --

Prepare your skeleton, because this update is all about the spook! Find your way South of Falador, where a mysterious portal can be found. Upon entering it, Death himself is there to greet you; But don't worry! You're not dead.... but if you mess up his orders, you could be! The Grim Reaper does not understand human's interest with material possession; Despite this, he is willing to give some of his material possesions up if you solve the puzzles right. You, yes YOU can have your very own Grim reaper hood! Or, if you didn't grab a hold of them last year, you can have pumpkins (not guarenteed for carving) and some halloween masks (to spook your neighbors for some candy, of course! In addition to this spectacular blast from the past, you can no longer get random events while in Corp's lair. Goodbye Sandwich Lady! Happy Halloween from the 2007scape wiki! Make it spooky!"

You can do all the links and cleanup and stuff... I'm heading to bed. --

I made some changes. Some big things you'll need to watch out for now:

you can make multiple(up to 9) sets of darts per tick, why revert my edits when i am correct.

The following claimed that it had inappropriate language in it, but I've failed to see any. It would be helpful if OSR Wiki had its own Rules of RS page, so I attempted to create it but can't due to the phantom bad words in it, which there aren't any.

Similar to the problem I had earlier, I did an editing overhaul on the Real world trading page. It also claims there were bad words in it, which there aren't.

I did more editing on the Player Moderator page this time and was hit with phantom bad words. Again, none were found as I did the edit in good faith.

Thank you very much.

Ahh didn't know a page like that existed! Had a few complaints that it was linking to useless pages so figured it was in need of a rework :P -Shaun Dreclintalk 00:34, December 22, 2014 (UTC)

Is there some place I can post messages to be sent to all the admins of the wiki? I don't want to do any major reworking of messy sections without giving a heads up and getting input from others. -Shaun Dreclintalk 12:04, December 24, 2014 (UTC)

Hmm, maybe we could make a message board talk page of some sort and poke all the admins to go follow it? Might be a good idea~ -Shaun Dreclintalk 02:54, December 25, 2014 (UTC)

Hi, can you undo my latest revision to Dragon Slayer. I linked Guildmaster to article and when i published it my internet got disconnected for some time and by some accident whole walktrough part got deleted. Can't undo it myself because it warns for bad language.  —The preceding unsigned comment was added by Abimees0 (talk) on 22:12, December 25, 2014‎ (UTC).

Are you editing those manually or do you have some tool that does it? Was too lazy to cut out the backgrounds haha -Shaun Dreclintalk 19:04, December 28, 2014 (UTC)

Hey, Spine! I was attempting to create a family tree template that would be helpful to this wiki especially on quest series. In my attempts, however, I managed to create some pages that were supposed to support the template, yet they didn't work as intended, so I'd like to request the deletion of the following pages:

As always, my edits are done in good faith. Thank you.