Uzer was a prosperous city in the Kharidian Desert famous for its clay golems. Today it is ruins, the city was destroyed during the God Wars.

Late in the Third Age Uzer was an advanced civilisation whose inhabitants were expert magical craftsman. It was also the only city to have created and used Golems. According to carvings on the temple the citizens of Uzer worshipped Saradomin, Zamorak and Armadyl though they were ultimately aligned with Saradomin. 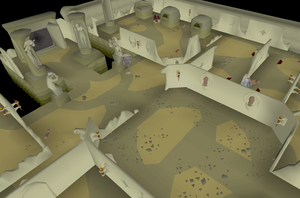 The underground portion of the ruins. Notice the various symbols of Thammaron, Armadyl, Saradomin and Zamorak.

Sometime towards the end of the God Wars, Thammaron, Zamorak's chief lieutenant, opened a portal from his own domain underneath the temple, bypassing the city's defences. Though the forces of Uzer drove him back, either a second attack by Thammaron or other Zamorakian forces destroyed the city. But before the city was destroyed an elite force of Golems raided Thammaron's lair, mortally wounding him. A single, heavily damaged Golem was the sole survivor of this assault. The survivors of the battle then fled to the city of Ullek, before it too was destroyed by Zamorakians under the command of Balfrug Kreeyath.

The ruins of various buildings and large kilns are in the vicinity of the temple. The large kilns were used to manufacture Golems, the temple and the Golem are all that remain above the desert sands. It is also where you can start The Golem quest.

Underneath the city lies the temple basement. To the east of the entrance black mushrooms spawn, while in the north-west one can find a strange implement. Statues of craftsmen adorn the halls while golem pieces litter the ground. A few ghosts lurk in the hallways. At the far end lies a portal to Thammaron's realm.

The throne of the elder demon.

The realm of the demon Thammaron is red and grey while a causeway of horns breaking the ground lead to his throne. To the left of the entrance lies the remains of Thammaron. Members can use a hammer and chisel on the throne to receive gems. This room is also a focal part of the Shadow of the Storm quest.