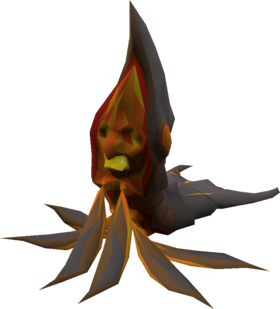 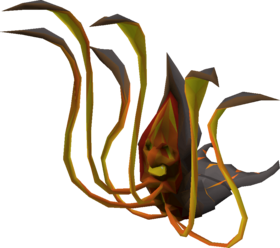 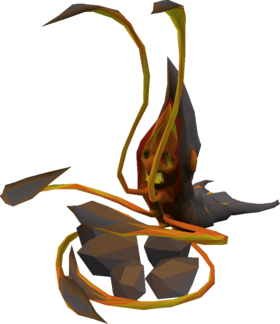 The Vanguard are a trio of Xeric's former commanders encountered in the Chambers of Xeric.

Each Vanguard is weak to a specific attack attack style, following the combat triangle:

Upon defeating all three Vanguards, the vanguard judgement will appear on the ground, giving the player some insight as to how the Vanguard came to be. 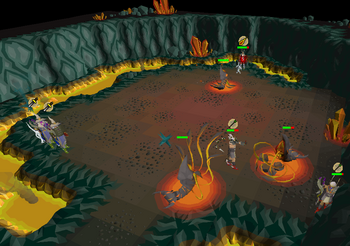 A group of players battle against the Vanguard.

The three Vanguards originally spawn underground. When a player gets near one of the holes, all three will burst from the ground.

All Vanguards attack three times with each attack; however, the magic and ranged Vanguards use AoE attacks (one always hitting the player while two are launched elsewhere). The melee Vanguard simply attacks the player three times for every attack it performs. Protection prayers will not nullify their damage, but they will reduce it. 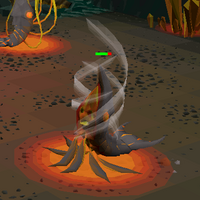 The swirling mass around a Vanguard, indicating that the difference between the three's health is approaching the maximum threshold.

To harm the Vanguards, damage must be spread equally to all three Vanguards. If just one of the Vanguard is heavily damaged while the others have much higher health (a difference of 40% in groups of four or less, and 33.3% in groups of five or more), the Vanguards will immediately shuffle and restore their health to full. As a warning indicator, a swirling mass of energy will appear around the Vanguards, which brightens in colour the closer they are to a forced heal.

To stop this from occurring, the Vanguards' health must be within similar range of the other Vanguards by the time they shuffle positions. Stomp damage is applied to players under them when they shuffle; this damage will not occur when they attack players. When the Vanguards shuffle, they will lose aggression over any players; standing in the corners will typically only cause one of them to attack.

As uncontrolled high damage is detrimental, weapons with low damage per hit such as toxic blowpipe are highly recommended. It may also be worthwhile to not activate damage boosting prayers and unequip gear that increases damage if there is a risk of dealing too much damage. Knowing the maximum hit for each weapon used is helpful.

It should be noted that the ranged Vanguard is static, and will be unable to attack players that are under it. The melee and magic Vanguards will attempt to move out if the player is under them. The melee Vanguard often does not attack players next to the walls or edges as it cannot go too far from its spawn point, and it will back away if it is attacked from these spots until the attacker is in its range. Vanguards can be damaged during shuffles, although only applicable if the hit lands before they do so. If the attack ends up dealing fatal damage when they shuffle, they will instead restore one health.

It is not recommended to use the dragon warhammer special on the Vanguards as their Defence resets after they return to their shell. Dragon claws or toxic blowpipe special attacks may be more useful, provided that they are used with caution as to not damage them over the threshold, although their fairly high defence bonuses (especially for the melee and magic Vanguards) may make this unfeasible.