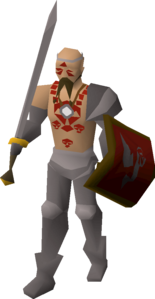 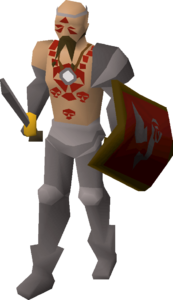 Vannaka is a highly accomplished fighter who serves as the Combat Instructor on Tutorial Island and a Slayer master in Edgeville Dungeon. He claims to be the greatest swordsman alive, which is suggested by his combat level of 146 and his ability to carry both a steel two-handed sword and dragon square shield at the same time, a trait unattainable by players. According to the 14th Postbag from the Hedge, his Strength level is 112.

During the tutorial, he dismisses the player character's attempts at making idle conversation, and proceeds to teach them how Melee and Ranged combat work. He tasks the player with slaying a giant rat in close combat. Afterwards, he instructs the player to kill a second rat from outside of the enclosure using ranged attacks, a strategy colloquially known as safespotting.

Vannaka gives the player a bronze sword, a wooden shield, a shortbow, and some bronze arrows to keep as part of his lessons on the island.

When encountered after the tutorial, Vannaka acts as a mid-level Slayer master. He is found due east of the Wilderness entrance within the Edgeville Dungeon, and is marked by a slayer master icon on the minimap. Players with Combat level 40 or higher may receive slayer assignments from him.

Players can receive Slayer reward points for completing Slayer assignments—this is based on how many tasks players have accomplished in a row. Completion of a task assigned by Vannaka will grant you: