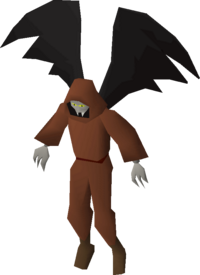 Vanstrom Klause, formerly Ascertes Hallow, is one of the brutal henchmen of Lord Drakan and a member of the Vyrewatch. Vanstrom is a murderous fiend who strikes terror into the hearts of the Myreque, a resilient group of people from Morytania dedicated to fighting their vampyre overlords. Vanstrom is Safalaan Hallow's father, the former King Ascertes Hallow, who was transformed into a vampyre by Lowerniel Drakan.

After being transformed into a vampyre by Lowerniel, the first thing that Vanstrom did was kill his daughter. Vanstrom swore loyalty to Lowerniel, and was given the position of tithe master in all of Morytania, overseeing the blood tithes throughout the region. He was also tasked with destroying any rebel cells that sprung up to oppose Lowerniel's rule.

Vanstrom soon learned of a rebel organization, the Myreque. Though he knew the identities of members of the organization, he did not kill them off one by one, as it would have caused suspicion. Much to his dismay, however, he was unable to find their hideout, where he could put an end to the rebels once and for all. Vanstrom soon discovered a human who had crossed the Salve and into Morytania. In his human form, he convinced the adventurer to help bring him some steel weaponry for the Myreque, claiming that he didn't have the time to do so. Tracking the adventurer, he soon discovered the hideout and barged in, killing Sani Piliu and Harold Evans. He then dispatched a skeletal hellhound to kill the remaining members. To his disappointment, the rebels were able to escape after the adventurer killed the hellhound.

Some time later, Vanstrom was speaking to Gadderanks, a human blood collector. He expressed disappointment with Gadderank's inability to fulfill his quota. Gadderanks defended himself by stating that there wasn't enough to tithe, as Malak got sick after consuming blood from Mort'ton, and while Canifis was giving more blood than agreed, it was not enough. Vanstrom then smelled some smoke which came from the town of Burgh de Rott; the adventurer had repaired the furnace, which alerted him to their position. Vanstrom then sent Gadderanks and two juvinates to begin blood tithes there, but they were killed by the same adventurer. It is also implied that Vanstrom sent some juvinates to intercept Ivan Strom's journey to Paterdomus temple, but this failed.

As the adventurer is taking sketches of Castle Drakan, Vanstrom spots and attacks them. He overpowers the adventurer, but is forced to let them go after Sarius Guile, Vanescula's servant, informs him that Vanescula wanted them alive. Vanstrom grudgingly complies and leaves the scene.

Search for the Myreque[edit | edit source]

Knowing the Myreque was a continued threat to the vampyres, Vanstrom worked with Ranis Drakan. The two paid a visit to Verzik Vitur at her castle. Verzik gave the two her abomination, claiming that once it obtained a whiff of a target's blood, it could track them anywhere. Vanstrom then headed to Serafina's former home and created an elegant trap that was able to trick Safalaan into giving up his blood, allowing the abomination to discover the location of the hideout. As with Ranis, he confidently believed that the Myreque were finally wiped out, but soon learned that Ranis was killed by the adventurer.

Following Ranis' death, Vanstrom was still unable to locate the Myreque. However, he had more pressing matters at hand, having learned of an illegal blood tithing operation at Slepe. He confronted Damien Leucurte at the Crombwick mansion basement, where he met Kroy. Vanstrom immediately disliked Kroy, considering him to be "barely" a proper juvenile, but soon learned from the juvenile that he had replicated the Elixir of Everlasting. Damien stated that they then mixed the elixir into the town's Bloody bracers, putting the humans into a deep sleep and allowed them to take more blood as they had less uses for it.

Vanstrom asked Damien who allowed him to do this. Damien stated that the nobles of Darkmeyer had requested it, but Vanstrom overruled him and stated that he would be the one to decide. Although impressed by the idea, he warned Damien that he had attracted the attention of the Myreque, including the human that had killed Ranis; due to his position, House Drakan could not protect him. Damien asked for protection, but Vanstrom refused, as he had defied Lowerniel for the last time and left.

The adventurer infiltrated Darkmeyer and attempted to enter the Arboretum, but was denied by Desmodus Lasiurus. Fortunately, they were able to bargain with Desmodus, who had the rightful custody of Gadderank's wife and son following his death as Vanstrom owed him a favour. However, the juvinate that was supposed to relieve them to him, Mordan Nikazsi, had been intercepted by Lord Alexei Jovkai, who had bought them off. The adventurer snuck into the prison the Gadderanks family was being held in, but was caught by Alexei, who asked what they were doing. Vanstrom, who had been on his way to the lower levels of the city, heard Alexei's shouting and investigated. Upon being informed of the situation, he recognized the Gadderanks family, and ordered Alexei to relinquish them, as they belonged to Desmodus. Vanstrom then recognized the adventurer's voice and demanded to see their face, which would have broken their cover, but Sarius soon arrived and stated that Vanescula needed him, much to his annoyance.

After the adventurer acquired blisterwood sickles for the Myreque, Vanescula brought the invasion party to Castle Drakan. She was immediately met by Vanstrom, who asked her what she was doing. He was surprised to learn that she had somehow obtained all of the Myreque when he had not, unaware of her plot to overthrow Lowerniel. However, Lowerniel anticipated her treason and confronted them instead, killing off Vanescula's vyres and half of the Myreque team. Lowerniel then tasked Vanstrom with killing off the remaining members as he apprehended Vanescula. Although Vanstrom had numerous powers at his disposal, the adventurer was able to defeat him. Safalaan then attempted to appeal to his past as Ascertes, but Vanstrom claimed that he had been uplifted and enjoyed killing his daughter. In response to this, Safalaan emitted a blast of energy that killed Vanstrom.