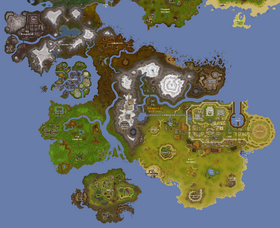 A map of the Kingdom of Varlamore, as seen from a poster of the world map.

The Kingdom of Varlamore, also known as the Shining Kingdom, is a kingdom found in the continent of Zeah, found far west of the mainland across the Western Sea. It is one of the three regions that make up the continent, the other two being the Kingdom of Great Kourend and the Kebos Lowlands[1].

The people of Varlamore, ruled by Queen Zyanyi Arkan,[2] are known to worship Ralos, the god of the sun.[3]

While players cannot currently visit the kingdom, there are four known areas of the kingdom:

The Kingdom was formed by refugees fleeing from Great Kourend during the Age of Strife 1,030 years ago, when Xeric ruled the kingdom.[4] Since their founding, they managed to avoid war with Great Kourend for nearly 1,000 years.[5]

The war had ended sometime before or during the reign of Great Kourend's King Kharedst III in the 132nd to 134th decade. In the hope of repairing the relationship with Varlamore, which had been destroyed after the war, the King ordered an envoy be sent to Varlamore to transport the Royal Accord of Twill, a document of great historical importance to Great Kourend, to be displayed in the Grand Museum of Civitas illa Fortis,[9] Varlamore's capital. However, the Accord became lost at sea,[10] and remained so until it was recovered by Artur Hosidius in the 141st decade.

Today, the betrayal of Emperor Imafore remains fresh in the minds of Kourend's people, and the trust has yet to be regained,[11] although it appears that Queen Zyanyi Arkan is eager to ease tensions between the two kingdoms during her visit to Great Kourend.[12][13]