Varrock (pronunciation: /və.ˈrɑk/ "vuh-ROCK") (originally known as Avarrocka and still known as such in barbarian speech) is the capital of the kingdom of Misthalin. It is one of the largest cities in Old School RuneScape and the largest city available to free players. It is also one of the most popular cities in all of RuneScape. The city is also known as Lemanto Andra ("Man City") in gnomic tongue.

The city of Avarrocka came into being in the year 700 of the Fourth Age, when the races that survived the God Wars began to compete for land without the direct aid of gods. At the time, the world was dangerous, and most of humanity lived in small nomadic tribes intent solely on surviving. One of these tribes, led by a small group of elders, was looking to settle in the forested territory that is now Misthalin. As they searched, they discovered a young boy, about two years of age, wandering near the River Lum, unable to remember his parents or speak. The boy was not ordinary, though, and stood nearly a foot taller than most his age. The wanderers, taking the boy's strength as a good omen, made a camp in the forest. It is said that, on that day, "both sun and moon were mingled in the sky." 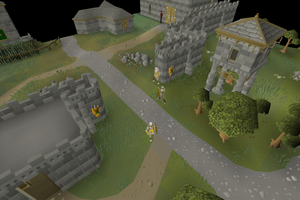 Varrock's banks are located near the east gate and near the west gate. They are very large buildings and are easy to spot. They are great places to buy and sell items as many players tend to congregate at these two banks. 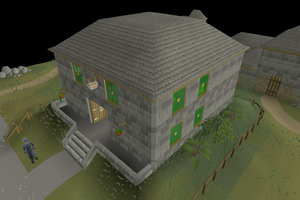 The east bank was once a very popular place to buy and sell items from other players before the introduction of the Grand Exchange. Some of the more common items that were sold here were rune essence and player killing goods such as food, lower levelled weapons and armour, runes, and potions.

The east bank also has a 1st floor[UK]2nd floor[US]. This floor is much quieter than the ground floor[UK]1st floor[US], though holds nothing of value. 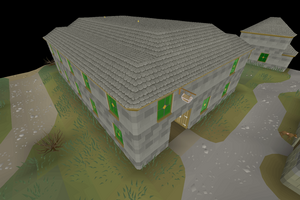 This was the first, and once the only, bank in RuneScape. In its early days, this bank, then known as the "Bank of Varrock," could only hold coins in its accounts. In modern times, this is the most popular free-to-play bank. Many popular free-to-play items such as big bones, logs, and feathers were traded here before the Grand Exchange was available.

The west bank also has a 1st floor[UK]2nd floor[US] and a basement. There is nothing on the 1st floor[UK]2nd floor[US], though it is much quieter than the ground floor[UK]1st floor[US]. The basement contains a south room with coins, one gold ore, one gold bar, a gold necklace, and a ruby ring behind a locked door. Players who have a Magic level of 33 or higher may use the Telekinetic Grab spell to obtain all the items except for the ruby ring. There is also a spawn of three coins on the floor to the north-east of the basement, directly in front of the stairs. The basement is a very popular place to have bank sales.

Varrock has many stores. Most of them are located in or around Varrock Square.

Varrock's general store is one of the most popular stores in the game. New players can buy a newcomer map, which can help them find their way around the free version of RuneScape.

Players can sell whatever they wish at the store, though mainly low level players sell their items, which are often not wanted by higher level players. It is also hard to sell items to this general store as many people sell their items here, causing the store's inventory limit to be reached very easily. Before the Grand Exchange, Varrock general store used to be a hub for trading, especially in F2P.

At the southern entrance is the Varrock Swordshop where players can buy swords. The store sells bronze, iron, steel, black, mithril and adamant daggers, swords and longswords.

Thessalia's Fine Clothes sell several types of clothes including robes, capes, gloves, and boots. Thessalia will also change a player's default clothing for a price of 500 coins. Players who were lucky enough to obtain a scythe when they were dropped, can retrieve it from this store if it is lost. Frog tokens from the frog random event can be exchanged for either a frog mask or a prince outfit at this shop.

There is also Fancy Clothes Store in the south-eastern part of the city. It features heavily in the Hunter skill, and it is here that you have furs made into camouflage and other hunter armour.

Near the centre of Varrock is Zaff's Superior Staffs, a store where players can purchase staves for Magic.

Zaff sells staffs, magic staffs, and elemental staves. He also sells battlestaves for use in the Crafting skill to players who have completed What Lies Below.

Horvik's Armour Shop is near the centre of Varrock. Here, players can buy platebodies and chainbodies as well as platelegs and some leather armour.

In the south-east corner of Varrock is Aubury's Rune Shop. Here, players can purchase most types of runes or be teleported to the Rune Essence mine. Players must come here and speak to Aubury twice during the Rune Mysteries Quest.

To the east of Varrock General Store is Lowe's Archery Emporium, a store which sells items designed for players who use the Ranging skill.

Lowe sells many types of bows and crossbows, as well as their corresponding ammunition.

Varrock has a total of three altars within its walls.

Varrock and the surrounding area has four pubs. Most Varrockian pubs sell only beer, but the Rat Pit Bar also sells stew.

The Blue Moon Inn is by far the most popular pub in Varrock. One-Eyed Hector the Pirate once stayed here. You can find a couple NPCs here besides the bartender, which include an unnamed Barbarian warrior woman, the ex-vampyre slayer master Dr Harlow, a tramp in the back room of the store, and the fat Johnny the Beard (who drops the Varrock Herald, used for Shield of Arrav).

The Dancing Donkey Inn is unknown to most of Varrock because it is in the corner of the city that contains little of significance. While there, you may stumble upon the three drunken NPCs here: Hops, too drunken to speak, Da Vinci, who hates free players, and Chancy, who loves to gamble.

The Jolly Boar Inn is actually outside the Varrock city walls, but is still considered a Varrockian pub because it is within the vicinity. The very tired Johnathon (involved in the Family Crest quest) can be found here. There are a lot of other NPCs here, including one woman, two men, and a Black Knight.

This very little known pub can be found down the manhole in south-east Varrock, in the area that is cordoned off. It is very small and is mostly occupied with gamblers taking a break from the Rat Pits mini-game.

Both of these are just outside of Varrock:

The Digsite is an archaeological excavation area just east of Varrock. Players need to proceed far enough into The Dig Site quest in order to fully use it. It is visited during several quests:

The Varrock Palace is the focus of many quests. It has a library, different floors and other things. Inside there is a trapped Monk of Zamorak in a cage. The Queen and King Roald reside here. Garden of Tranquillity is the most notable quest. Inside also resides a few warrior women. The palace also contains the Library of Varrock, which is filled with books explaining the history of RuneScape. The Varrock Square is directly in front of the palace.

In the Demon Slayer quest, there is a drain on the north-east part of the palace. Inside, there is a key to retrieve. To get it, you must pour water down the drain by getting a bucket (there is one conveniently located near the stairs that leads into the kitchen on the 1st floor[UK]2nd floor[US]), filling the bucket with water, and pouring the water down the drain. The key will then slosh down to the Varrock Sewers, which is on the east side of the palace.

Like the palace, it plays a part in quests such as Shield of Arrav, The Golem, The Dig Site and Desert Treasure.

The natural history quiz is the basement section of the Varrock Museum miniquest. It consists of 14 creature displays in which the player must answer three questions correctly in order to earn two kudos each for a total of 28.

Each of the rooms has a natural historian, who will give a lecture about each creature for which the quiz is based on.

To start the quiz, speak to Orlando Smith in the centre of the room. Click on the plaque in front of a display to get a question. After answering three questions correctly, the quiz questions are replaced by the common name and scientific name of the animal.

Once all questions are complete, speak to Orlando again to receive 1,000 experience in both Hunter and Slayer. Note: If this is the first Slayer experience you have received, you won't receive a free enchanted gem from the Slayer Masters during your first assignment and will need to pay 1 coin to buy one.

The stone circle south of Varrock plays a big part in Demon Slayer. This is where Delrith is summoned, and where he is defeated by the player.

The stone circle has many level 20 and level 7 dark wizards and is very popular for players, especially rangers, to train at because of the runes they may drop. It is also because of these wizards that made it notorious for new players to be killed, thus inviting a lot of high level scavenging players to take what was dropped by the dead players.

Many quests can be started in or around Varrock. These quests are listed below:

Players may find many amenities available to them throughout Varrock.

Ranges are located in small houses all over Varrock. They are easy to spot. The best one for cooking, which is nearest to a bank is the one to the south-west of the east bank.

Low level players can raise their combat level by hitting dummies north of the east bank and on in the castle.

Baraek is a fur trader in Varrock Square. He can be used to complete the quest Shield of Arrav.

The Apothecary is south of the west bank. He can make strength potions provided that players bring him 5 coins, one limpwurt root, and some red spiders' eggs. The Apothecary can also make energy potions with 1 chocolate dust and 2 limpwurt roots.

South of Varrock is a master farmer who can be thieved for seeds.

On one of the bookcases in the palace there is a book named "Conan the Librarian", paying homage to the movie UHF.

Benny sells the Varrock Herald, the newspaper of Varrock, for 50 coins.

There is a leather body spawn place near the magic store (in house with two logs spawning too).