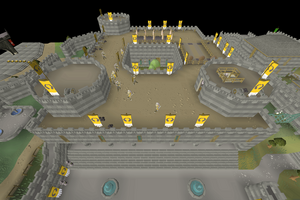 Varrock Palace is the official residence of the ruler of Misthalin as well as the nation's primary diplomatic and military centre. Located in central Varrock, it is the largest building in the city.

Since the Fourth Age, Varrock Palace has been a hub of economic, political, and social development within Misthalin. The palace currently houses King Roald Remanis III and his wife, Queen Ellamaria Remanis. As their full-time residence, it is equipped with kitchens, barracks, dining areas, a church, a large garden, troop housing areas, and other facilities.

Apart from being the home to the majority of Varrock's royal family, the palace is also the home of the Varrock Guard, the city's primary law enforcement agency. The Varrock Palace Secret Guard also occupies the palace, albeit secretly and presumably from some type of underground tunnel network. The city's knightly order, which has remained largely elusive in recent years, also makes its home in the palace, although Sir Prysin is the only one to show himself publicly. The palace is designed to withstand military siege, and has been directly attacked at least three times: once by Lucien in a largely unsuccessful zombie invasion, a second time during the Misthalin-Morytania War of 164 by zombies placed within the crypts below the palace which resulted in the destruction of a 600-year-old tower and more recently by Lucien's cousin, Zemouregal, and lastly, in the Battle of Varrock Castle. It currently plays a large role in the Sanguinesti Liberation War, which is otherwise centred in Morytania.

The palace is also a diplomatic hub, attracting ambassadors and business representatives from all over Gielinor. Virtually, every non-hostile race and nation has established some type of peaceful tie with Misthalin, and most have operated in some way through the palace. The Varrock Library, one of the largest in the world, is also housed here.

Amongst players, the palace is popular for its guards, who are commonly killed for Combat training and pickpocketed for Thieving training and profit. It also houses a Farming patch and several species of tree for Woodcutting. Its connection to Varrock Square makes it a popular route of travel. The palace also plays a large role in a number of quests and other in-game activities.