The Varrock Sewers are a network of tunnels under the city of Varrock. It is a fairly large multi-combat underground area filled with low to mid-level monsters and is one of the largest dungeons in free-to-play.

A knife, slashing weapon or sharp-object (e.g. scimitar) is required to access certain parts of the sewer to cut a spider web (note: a throwing knife will not work).

The Varrock Sewers can be accessed via a manhole just east of Varrock Palace. Members can also access the sewers through Edgeville Dungeon by using a pipe shortcut near Vannaka - this requires 51 Agility, and drops players off near some of the moss giants.

The dungeon is fairly popular on free worlds, as players may battle moss giants which are often trained on. The dungeon is a multi-combat area, so low levelled players should bring extra food in the event that multiple monsters attack them.

The dungeon is also home to Bryophyta, a moss giantess boss. Accessing her chambers requires a mossy key, which is obtained from killing moss giants.

Players can talk to Grimesquit on the south side of the sewers to start the Ratcatchers quest. 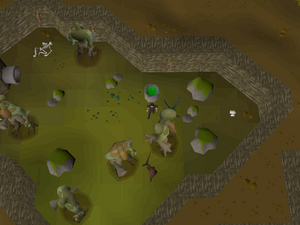 The clue location to dig.

Digging near the cauldron by the moss giants under Varrock Sewers (with a slash weapon, knife, or 51 Agility for the shortcut pipe from Edgeville Dungeon) is the solution to a hard cryptic clue: My giant guardians below the market streets would be fans of rock and roll, if only they could grab hold of it. Dig near my green bubbles!