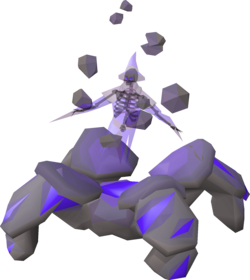 Vasa Nistirio is one of the bosses encountered in the Chambers of Xeric, who accompanied Xeric during his exile as his High Priest. After obtaining untold power from the glowing crystals, he went mad with power and attempted to overthrow Xeric, only to be defeated and bound to them to serve as a guardian of the chambers as punishment.

Vasa Nistirio is initially seen as a pile of rocks. Upon approaching the pile, he will animate himself and start the fight. He will also raise a purple flame at the entrance, which will damage players who pass through it. The fight begins with his special attack.

Vasa has a special attack that he can use when he is at the centre, where he will teleport everyone in the room. Half of the team will be teleported to the edges, while the remaining half will be teleported next to him (if soloing, you will always be teleported to him). Those next to him will be stunned and have their prayers disabled. Those teleported to the edges should run to the centre and activate Protect from Magic. Vasa will unleash a magical barrage against everyone next to him, dealing massive damage. He cannot be attacked while charging this attack and teleported players are prevented from activating any sort of prayer until the attack concludes; however, attacks that land just as he starts it up can still damage and potentially kill him.

For teams, the player with the least amount of Hitpoints should initiate the battle and stand next to him; then, teammates should cross the flame and use Protect from Magic next to him once the low-health player initiates the battle. After his magical attack, players can switch to Protect from Missiles. If the team has overloads, using them before entering the room is a good idea. Solo players will have to take the special attack's full effect (at the start of the fight as well as any consequent times), but they can start the room with lower health to avoid getting killed after the attack or use Vengeance to rebound large amounts of damage back.

Vasa throws boulders as a standard ranged attack to any players within 9 tiles of him but not underneath, in which he applies rapid stomp damage of up to 8 damage per tick. The boulders are fairly accurate and can hit hard, so using Protect from Missiles will reduce their accuracy and strength. After a teleport attack, Vasa will activate one of the four crystals in the corners of the room and walk his way over to it. Once he reaches it, he becomes invulnerable to damage and will begin healing small amounts of health and restoring any drained stats. The crystals are immune to ranged, take 66% less damage from magic and are highly resistant to crush and slash attacks, making stab the only option.