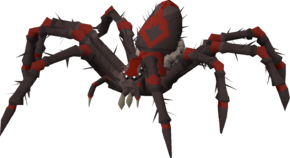 Venenatis is a large poison spider that resides east of the Bone Yard, and is the only monster to drop the treasonous ring. She uses multi-target Magic and long-ranged melee attacks. She is able to drain Prayer as well as perform a lethal stun attack that can hit up to 50 damage, and may combine it with another attack if the player does not have Protect from Magic active, which is capable of instantly killing the player. Unlike the other Wilderness bosses, Venenatis' lethal attack has a chance of failing.

According to Phabelle Bile, Venenatis is the last of her kind, who were hunted to extinction by dwarves. It is also revealed that she has a lair of her own, but she only goes there to recover from her wounds. It is not seen anywhere near her roaming area either.