Venenatis is a level 464 spider boss that is found in the Wilderness. Unlike the other three bosses, she is below the level 30 Wilderness line and resides in a partial single/multicombat area, making it safer to kill her compared to the other bosses, which inhabit full multi-way areas.

Venenatis has many attacks that she uses against her target. Her attack speed can also vary e.g. she may use a Magic attack then a Melee attack in consecutive game ticks.

Note: Fighting Venenatis while she is in a single-way area will only deal 1-8 damage regardless of the player's equipment and stats. Full damage will only be dealt if she is in a multi-way area. 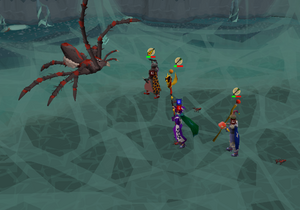 A trio of players fighting Venenatis.

When fighting Venenatis, it is highly recommended to use ruby and/or Diamond bolts (e) if ranging, as Venenatis's incredibly high Defence (level 490 Defence with 100 ranged defence bonus) means that most bolts are unlikely to hit. Verac's set is mandatory if using melee, as her incredibly high defence is paired up with extremely high bonuses (260 all-round defence bonuses) means that all melee weapons will have a hard time attacking her.

Regardless of the player's setup, activate Protect from Magic. Piety for melee and Rigour for ranged help as well. Also, Vengeance runes are recommended to deal with her web/melee attacks as she can deal heavy damage. Unlike other Melee-using bosses, Venenatis' melee attack also doubles as a long-range attack. Drink a dose of anti-poison (unless you are using a Serpentine helm), since Venenatis can poison with her attacks.

The safest way to fight Venenatis is to lure her into a multi-combat area, while attacking her in the single-way area. Any PK'ers who arrive while you are fighting Venenatis while doing this will be unable to attack you, allowing you to quickly teleport if any appear. Should you be attacked, only one player will be able to attack you at a time.

A cannon is recommended if not killing Venenatis with a safespot to speed up kills.

The more common safespot, Venenatis can be safespotted from this location just as well. While slightly deeper in the Wilderness (30-31), it may be easier to pull off, depending on RNG and black knight activity, compared to the other safespot. An image below the guide provides the key tiles (yellow squares). It is possible to safespot Venenatis behind the trees south-west of her. Compared to the north safespot, it is arguably safer as it is in lower Wilderness (24-25) and closer to the single-way combat zone; as such, players can use a royal seed pod to immediately escape. It is advised players zoom the game out as far as possible though, as the slope used during the safespot inconveniently blocks the view.

Players who are teleblocked and trying to escape can attempt to run south to the green dragons in the hopes that the dragons will attack any PKer(s) trying to kill them and get the chance to safely log out.

Note: Do NOT attack Venenatis until the sixth stage, else she will retreat back to her respawn spot.

This method requires the use weapon that attacks at a rate of 3 ticks, such a Craw's bow or Magic shortbow on rapid.