Four Vents are part of the Ver Sinhaza castle in south-eastern Meiyreditch. Three of these vents can be climbed during the A Taste of Hope quest to spy on a conversation between Verzik Vitur, Ranis Drakan and Vanstrom Klause. A fourth one is damaged and cannot be climbed. 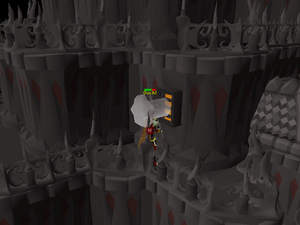 A player being hit by a vicious burst of steam.

These vents emit steam in regular intervals. Attempting to climb the vent when it emits steam will result in receiving damage and falling back.

Climbing these vents does not give any experience.