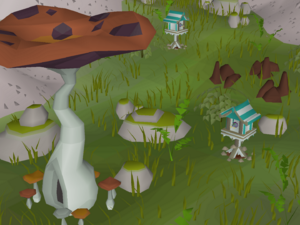 The Verdant Valley is a small valley south of the Museum Camp near the Fossil Island Volcano. The Valley itself is full of lush greenery, likely due to the volcanic ash deposits in the surrounding area and a stark contrast to the volcanic landscape that surrounds the Valley.

It has a Magic Mushtree and three iron rocks, which can be mined without moving, thus ideal for power levelling. This makes it is one of nine mines in RuneScape where three iron rocks can be mined without moving, with the other eight being the Mining Guild, Legends' Guild mine, Al Kharid Mine, Piscatoris mine, Lovakengj mine, Mount Karuulm mine, Trahaearn mine and Wilderness Resource Area.

In addition, two bird house spots are in this area.