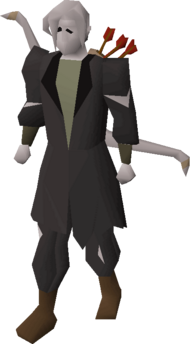 Vertida Sefalatis is a member of the Sanguinesti division of The Myreque. He is first seen in the quest Darkness of Hallowvale, when the player arrives for the first time in the Myreque Hideout. He is the only one in the hideout at the time, and asks you who you are and what you want. When you explain your reasons, he calms down a little and tells you to talk to his leader, Safalaan Hallow.

Vertida seems to be a very good ranger, and has a bow and a quiver of arrows strapped to his back. He can always be found in the war-room of the Myreque hideout in Meiyerditch. He appears to be second in command to Safalaan in the Sanguinesti order of the Myreque.

After completing A Taste of Hope, Vertida will sell you Ivandis flails for 20,000gp each.

During Sins of the Father, after you have crafted the Blisterwood flail, you can buy additional flails from him, for 40,000 each.

Vertida, along with the majority of the Myreque, is tragically killed by Lord Drakan near the end of the Sins of the Father quest, after Vanescula's plan to overthrow her brother fails, causing him to leave his Castle for the first time in centuries and to retaliate. After this happens, Vertida's former role of selling the player silver weapons is passed to his subordinate, Ivan Strom.