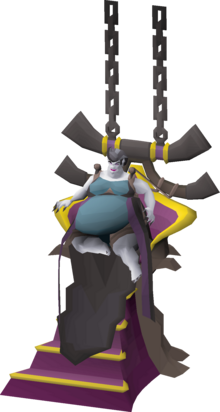 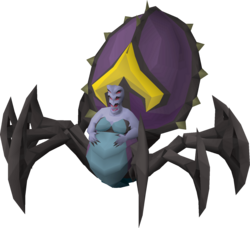 Lady Verzik Vitur is a vampyre who rules over Ver Sinhaza. She is the hostess as well as the final boss of the Theatre of Blood, and currently the strongest monster in Old School RuneScape.

Verzik Vitur was the head of the Vitur family on the vampyre homeworld of Vampyrium, and arrived on Gielinor alongside many other vampyres during the Second Age brought by Zaros, who the vampyres refer to as the "Stranger from Afar". Before her departure, she had domesticated a large number of nylocas, which she brought with her to Gielinor. Verzik was fond of culture and collecting, amongst her prized artefacts were the Scythe of Vitur, a most valuable weapon and heirloom of the ancient and revered founder of House Vitur, and the Ghrazi rapier, which she inherited from her father. She supposedly took a role in the military of the Zarosian Empire as she was granted an Avernic defender during her service.

Lady Vitur was on good terms with the Drakan family, especially with Lowerniel Drakan, and continued supporting them even after Drakan's participating in Zamorak's rebellion against Zaros.

During Lowerniel Drakan's conquest of Hallowvale, Verzik worked with Ranis Drakan, capturing a Saradominist Justiciar and tortured him for several days. The Justiciar revealed a secret tunnel underneath the royal castle, which allowed Lowerniel's forces to capture King Ascertes. Although Vanescula believed that Lowerniel did not like having the war end so early, he nonetheless rewarded Verzik with Efaritay's castle. She also collected the armour of the fallen Saradominist soldiers and kept them in her treasury. Verzik would later oversee a massive renovation of the castle, which then became known as Ver Sinhaza.

Due to her fondness of "playing" with her food, she often demanded entertainment on the spot from her vampyre soldiers. She eventually became bored of this and had the Theatre of Blood constructed, where powerful creatures would be placed inside for challengers to fight under the pretense of freedom from blood tithes should they prevail. Although some challengers may have prevailed against her lineup of creatures, she personally finished off those who made it to her.

She assisted Lowerniel Drakan once again during the Misthalin - Morytania War during the Fourth Age, when Drakan launched an attack on the kingdom west of the River Salve. Although the kingdom of Misthalin was victorious and the Seven Priestly Warriors managed to establish a blessing on the River Salve making it impossible for vampyres to cross, Lord Drakan rewarded Verzik for her support by giving her the Sanguinesti Staff, which he had crafted himself.

She created an extensive breeding program for her nylocas, which resulted in three new types of Nylocas: Athanatos, Matomenos and Vasilias. One of these Nylocas bit her, which granted her new abilities but also made her obese and vulnerable to non-silver weaponry. She complained of a sickness, prompting the doctor Vulcan Orvoros to pay a visit. Although he helped her, he discovered the symptoms had returned and tried to persuade her to visit his office in Darkmeyer, but she refused. She likely had him killed shortly afterwards.

After opening the Theatre of Blood to all, Verzik encountered a particular set of outside humans that bested all creatures within and eventually made it to her. Although she was impressed with their skills and thoroughly entertained by their performance, she stated that she couldn't let them leave and attempted to kill them. Despite her best efforts (including the use of her vampyre-nylocas form), the group proved to be too strong, and Verzik was forced to flee, transforming into a bat, much to her apparent embarrassment. Despite this, she eventually returned to see more challengers, even if they were the same ones who could best her in battle.

Verzik makes a small appearance in A Taste of Hope, where she gives Vanstrom Klause and Ranis Drakan an Abomination to help them hunt down The Myreque.

To initiate the fight, a player must first talk to Verzik Vitur. She will have 3 phases: