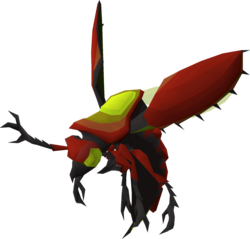 Vespine soldiers are offspring of Vespula. They will only appear if the team allows a lux grub's growth meter to reach zero, at which point it will transform into a vespine soldier, while also healing Vespula and the abyssal portal. Players will need to deal with the vespine soldiers while also working against Vespula if this occurs.

Vespine soldiers have relatively low health, and when it is nearly depleted, they stop flying and become immune from damage. After a while, they explode, and another grub appears where it hatched.