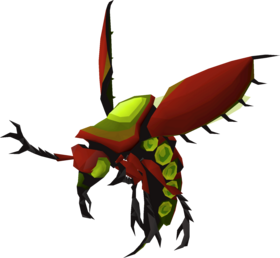 Vespula is one of the bosses encountered in the Chambers of Xeric. It is a parasitic wasp from the Abyss that Xeric and his followers stumbled upon when attempting to open a new dimensional tear.

Use Protect from Missiles, and attack with Ranged. Vespula can poison players starting at 20 damage, so a serpentine helmet or another form of poison protection is highly recommended. In addition, septic tentacles will spawn near the entrance, dealing moderate poison damage (will not cause poison) to those who pass it once the fight starts.

Vespula also spawns alongside four lux grubs, which she will periodically sting. If their health reaches 0, they will transform into a vespine soldier, healing Vespula and the abyssal portal while they are alive. The grubs' health can be restored by feeding them medivaemia blossoms, which can be found on the opposite end of the chamber.

When Vespula reaches 20% of its health, she will stop flying, and can only be harmed with melee. During this time, the team should focus their attacks on the abyssal portal. Enchanted ruby bolts can be very effective against the portal. After a short time, Vespula will go back to flying, and the team should refocus on her. While it is possible to attack the portal at any time, it will cause Vespula to become enraged, using her stinger to attack anyone nearby for high damage. This can be avoided by staying away from melee distance or going under her, though doing the latter will cause rapid stomp damage of up to eight per tick instead. Whilst Vespula is enraged, the abyssal portal will drain the prayer points of players standing in range by three points every two ticks; if prayer points are already depleted, then three damage will applied instead.

When the portal is destroyed, Vespula and the lux grubs will fall with it, ending the encounter.

Generally the most efficient strategy is to focus exclusively on damaging the portal with a long-range weapon, particularly a twisted bow, or a powered staff set on long-range. With 90+ Hitpoints, players using Redemption are safe for the most part, as all damage (when properly done) comes from the stomp damage which is too low to kill outright, provided that Redemption is active. Players have to stand on a specific tile to avoid damage from Vespula's melee attacks, which deal much higher damage — it is diagonal from the lux grub closest to the portal, away from it — and click on the portal to attack, then retreat to the 'safe' spot while waiting for the next attack. Due to Prayer frequently draining to zero with this method, it is highly recommended to get a Prayer enhance (+) potion before entering the room. Stamina potion is also required due to the constant running, and an antipoison is recommended for mistakes.