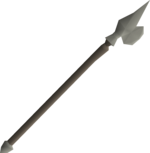 Vesta's spear is a 2-handed weapon exclusive to the original Deadman Mode and Deadman Seasonals, requiring 78 Attack to wield. It is part of Vesta's equipment, a set of Ancient Warriors' equipment, and is dropped by any monster found in the Wilderness as part of a global loot table, the chance being relative to the combat level of the monster.

In addition, the user becomes immune to melee attacks for 8 ticks (4.8 seconds).