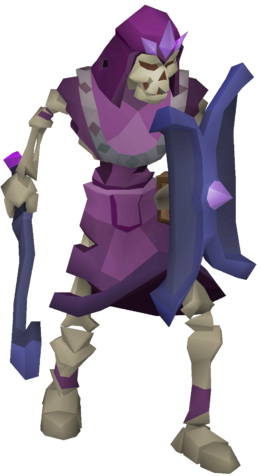 Vet'ion (pronounced "VET-e-un") is a Zamorakian skeletal champion that resides north of the Bone Yard and south of Lava Dragon Isle, and he is the only monster to drop the ring of the gods. Like other bosses in the Wilderness, he can also drop the dragon pickaxe.

Vet'ion has two forms: the (purple) regular form and the (orange) reborn form. After he is defeated in his first form, he will go to his second form. His stats or abilities do not change between forms. If he is not killed within five minutes in his second form, he will revert to his first form with the same hit points. If he reverts after his hellhounds have been killed, the player(s) will not have to kill them a second time.

Unlike the other Wilderness bosses, Vet'ion's lethal attack has a cooldown and as such cannot be used in quick succession.

According to Andros Mai, Vet'ion's power comes from his resting place, which has yet to appear in-game.

Vet'ion is highly resistant to any combat style other than crush, and as he is undead, he is susceptible to Salve amulet and its enhanced version. He is not immune to magic damage.

Vet'ion primarily uses a melee that can target players up to three tiles away from him. He also frequently uses an unblockable but avoidable magical attack that launches three lightning bolts, one at the targeted player and two randomly somewhere nearby. Lastly, he may smash his scimitar on the ground, causing an earthquake which deals up to 45 damage on all players within 6 tiles of him, though it's possible for the attack to deal no damage.

He's fought similarly to the Kalphite Queen in which he has two forms, a "normal" and "reborn" form. When he reaches half health in his first form for the first time, he summons two level 214 Skeleton Hellhounds that attack with powerful melee, and must be killed as they grant him complete damage immunity while alive. In the second form, they become level 281 Greater Skeleton Hellhounds that are even stronger and must also be killed.

Like the Kalphite Queen, if players don't kill his second form within 5 minutes, he'll revert back to his normal state.

Vet'ion will exclaim several quotes throughout the fight: 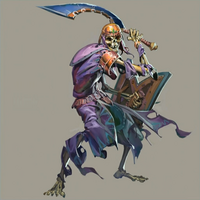