Warning: Like all Wilderness bosses, Vet'ion resides in a multi-way area and in moderately high-level Wilderness. You may be attacked at any time during the kill. Do not bring any items that you are not willing to lose. Items like the Salve amulet (ei) are permanently lost if not protected and the player dies to a player beyond level 20 wilderness.

Vet'ion is located just north of the Bone Yard, residing in level 31-35 Wilderness. The fastest ways to get there are to:

Always keep risk to a minimum at all times! An example of a typical setup is Monk's robes, Salve amulet, and Abyssal bludgeon. The dwarven helmet provides a crush bonus. Although players can be assigned Vet'ion for a Slayer task (of skeletons or himself), the Slayer helmet will not provide the offensive bonuses against the hellhounds, compared to the Salve amulet, which gives offensive bonuses against both of them. If using Verac's flail or Dharok's greataxe, it is advised to bring the set to use its effect, but beware of the risks.

Note: The side weapon is only if using anything other than a Viggora's Chainmace, an Abyssal bludgeon or a set of Dharok's/Verac's to kill the hellhounds quickly.

Warning: If bringing along a special attack weapon, you will risk a Barrows item. Otherwise, omit the special weapon, or bank it after spec'ing on pre-trips where nothing is brought or equipped other than the special weapon.

Assuming the player is not utilising the safespot or flinching methods to take on Vet'ion, it is highly recommended to use Protect from Melee and constantly dodge Vet'ion's magical attacks. Thus, tanking gear like Barrows equipment is ideal.

See the safespot method. Regardless, the setup consists of Monk's robes, Salve amulet, and Abyssal bludgeon. Alternatively, full Proselyte or Initiate armour can be worn in lieu of the monk's robes.

For the inventory, you want to bring a divine super combat potion/super set, a few prayer potions, and for the rest, monkfish or better. Additionally, a Stamina potion will help since some running is involved. Also, a Saradomin brew and Super restore can help a bit if low on health and prayer. A looting bag is optional, and the royal seed pod can teleport you out of level 30 Wilderness and below if you can make it.

Remember you will risk a Barrows item if carrying a special weapon while wearing a full set of Barrows, so it would be wise to omit the weapon. Otherwise, use it during pre-trips without risking anything (i.e. one-iteming), banking it afterwards and getting out your gear.

Depending on how you choose to get there, either a games necklace or an axe would be brought. Also, if teaming, some Vengeance runes could help.

Vet'ion has several attacks and abilities: 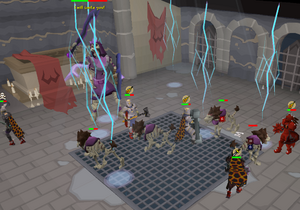 A trio of players fighting Vet'ion.

A player walking Vet'ion east into position to set up the southern safespot.

While Vet'ion has the lowest defensive modifiers out of the three bosses (-10 crush defence), Vet'ion does have a high Defence level of 395. Despite this, players will be able to hit quite frequently as long as they have 90 or higher Attack, due to his negative crush defence. Using a Bandos godsword or Dragon warhammer will help lower his Defence and make the kill smoother.

It is possible to kill Vet'ion without using safespots, but it is not recommended to do so. This is due to the fact that he is like the Kalphite Queen but far more tedious: players have to continually move to avoid being hit by his magical attacks, they are subjected to highly damaging shock waves, and have to deal with skeletal hellhounds in both his normal and reborn form.

There are two ways of killing Vet'ion with safespots: the safespot or the flinching method. Players could average roughly 10-12 kills per hour with little-to-no harassment from player killers.

The safespot method utilises the chaos dwarf camp east of Vet'ion. When used correctly, Vet'ion will not retaliate back or retreat, essentially making him an easy target.

Note: Sometimes, Vet'ion won't move into position, and sometimes, he'll step forward in reborn mode, so you'll need to walk him into position or re-lure him. While walking him, it's strongly advised to use Protect from Melee. Steps to take to lure Vet'ion successfully at the northern safespot. The spot to run to after pulling Vet'ion over to the campfires for the northern safespot.

To use the northern safespot, grab Vet'ion's attention, and move him towards the chaos dwarf camp. Run to the east and west campfires, and stand on the westernmost fire. Once he stops to attack you, run directly north as shown in the image, and stop just before the tile with rocks on it (the northernmost tile near the dead tree before the rubble); otherwise, you'll lose his attention if you run too far away and have to repeat the process. Wait until he attacks again, and run back towards him at his feet. As you'll be within his melee range, activating Protect from Melee beforehand will negate his standard melee attack, but his shock wave is unblockable and can hit up to 45 damage. After he moves over to the east, run under his feet, and he should move over to the side. Steps to take to lure Vet'ion successfully at the southern safespot. To use the southern safespot, grab Vet'ion's attention, and move him towards the chaos dwarf camp. Move to the cave entrance at the bottom of the camp (on the south-west tile), and wait there until Vet'ion gets closer. When he gets within range, move straight down, directly south, towards the level 30 line until Vet'ion is aligned with the cave entrance. Moving east or west will mess up the lure. Once this is accomplished, move back up and go under Vet'ion and hope that he moves east while you are under him. If Vet'ion moves west, he will need to be lured back to the cave entrance again to get him in position. Steps to take to lure Vet'ion successfully at the western safespot.

To use the western safespot, grab Vet'ion's attention, running south into the forest of dead trees. Stand behind either the northernmost tree stump or the tree at the north-west tip of the forest, and wait there until Vet'ion draws closer. Moving too far south will cause him to lose attention, and if he gets too close, he will damage you when you run out. Once he gets within range, run straight west to the north-east tip of the rocky outcrop. From there, wait until he launches his magical attack, and go a bit south and then to the first safespot (a bit north-east of the rubble and marked without rubble). After a few seconds (usually when his magic attack dissipates), prepare and hit him once, and quickly run to the second safespot, which is about two spaces east of the first. If you attack too fast or are not fast enough, he will damage you! From here, hit him twice at most based on the attack speed of your weapon before retreating back to the first safespot and repeating the attack sequence, which is one hit from the first safespot, immediately run to the second, two hits from the second, and return to the first. Be careful to neither attack too slowly nor hit him a third time, or he'll retreat, prompting you to return back to the tree to re-lure him.

The flinching method can be performed at many single tile obstructions within Vet'ion's roaming range, such as the dead tree near the agility shortcut to the Lava Dragon Isle. It is very similar to the flinching method used to kill the Chaos Elemental. To start this method, run up to Vet'ion to cause him to become aggressive. Then, retreat back to behind the obstruction, such that he does not attack you. Make sure you have used whatever boost potions you want to use, flick Piety on, and click to attack Vet'ion. Then, immediately run back to your safespot, flicking Piety off as you do so. Wait for Vet'ion's health bar to disappear. If you attack him again while his health bar is still visible, he will retaliate back.

Unfortunately, this method is much more difficult to apply here than the Chaos Elemental. Firstly, halfway through both phases of the fight, Vet'ion summons skeletal hellhounds. Where he summons them is inconsistent, as well as whether or not they are immediately aggressive to the player. Luring these hellhounds to a spot where you can fight them without taking damage from Vet'ion will be very dangerous depending on these factors. Secondly, there is a time limit in defeating the second phase. As this method requires a good deal of waiting, it takes a fair amount of time to deal the required damage. That, combined with the time required to kill his skeletal hellhounds, means that it is possible for Vet'ion to return to his normal form.

Since Vet'ion can only be attacked safely when his health bar disappears, using powerful crush weapons, such as godswords or the elder maul, will have a slight advantage when flinching him. The only issue with such slow weapons are the skeletal hellhounds, especially the greater ones which need to be killed quickly.

This ranged method is simple and allows you to relatively easily avoid taking any damage from Vet'Ion and requires less attention than the other methods. The downside is that it results in noticeably slower kills than the other methods and you are fighting in deeper Wilderness. Completion of the hard tier of Wilderness Diary and

74 Agility is highly recommended. Use a crossbow with diamond bolts (e) and set it to longrange attack style. Get Vet'Ions attention, use the shortcut to Lava dragon isle if you aren't there already and shoot him from distance. Rune crossbow on longrange has higher range than Vet'Ions special attacks. When the skeletal hellhounds appear, target them as soon as possible to prevent them from running south and be careful to avoid Vet'Ions special attack if that pulls you in his range. Bringing dragonfire protection is recommended.