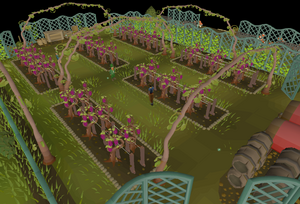 The vinery is a greenhouse in which grapes are grown. Lord Kandur Hosidius, the current Lord of Hosidius, successfully grew a new strain of grapevine in order to produce better wine to sell to the dwarves in Lovakengj. There is a bank available that any player can use; it doesn't require any favour either.

The vinery is looked after by Gallow, an experienced farmer and an expert on wine and viticulture, who will tell players how to grow grapes.

Players can plant grape seeds, obtained from the Tithe Farm minigame, with level 36 Farming, a Gardening Trowel and Saltpetre. Doing so will require players to have at least 65% Hosidius favour. There are twelve vine patches for players to use, and each seed planted grants the player 0.8% favour.

In addition, players can pick Zamorak's grapes instead of regular grapes by holding Bologa's blessings in their inventory. For each grape harvested, one blessing is consumed, so multiple blessings are required for each vine patch if the player wishes to harvest a full patch of Zamorak grapes.

An overlooked use of the Vinery location is its banking location and the proximity of snape grass on the tip of the nearby peninsula to the north-northeast; there's a spawn of 10 snape grass there. Players can run back and forth between the vinery bank and the snape grass location making it a faster alternative than going to the Crafting Guild peninsula (unless the person has hard Falador Diary completed giving access to the bank in the Crafting Guild). Don't be fooled by the seaweed though. The seaweed looks very similar to snape grass, yet the snape grass only spawns at the very tip of the peninsula.