The void seal is a piece of Void Knight equipment reward in the Pest Control activity. It can be bought from a Void Knight for 10 commendation points. Unlike the rest of the Void Knight equipment, players do not require at least 42 Attack, Strength, Defence, Hitpoints, along with 22 Prayer to buy and wield one. This item is worn in the neck slot. The seal, when the player clicks the 'operate' function, will inflict about 10 hitpoints of damage upon nearby Pests. The seal has eight charges. Once its 8 charges are used, it dissolves. It can only be utilised in Pest Control games, and is useless in normal combat except for its slight defensive bonuses. 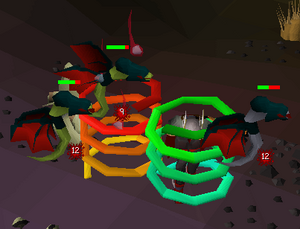 A player uses a Void seal to damage surrounding torchers.

Due to the void seal's limited uses and the fact that it gives no XP, it's very rarely purchased.