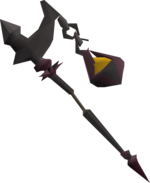 The volatile nightmare staff is a staff that is created by attaching a volatile orb to the nightmare staff. Requiring level 75 Magic and 50 Hitpoints to wield, it can autocast offensive standard spells as well as Ancient Magicks. The upgraded staff is untradeable, but it can be reverted to its tradeable components at any time. If lost on death in the Wilderness, the killer will receive the staff and the orb.

The volatile nightmare staff has a special attack, Immolate, that consumes 55% of the player's special attack energy to hit the target with 50% increased accuracy and dealing a high amount of damage. The special attack does not consume runes.

The base damage for Immolate is scaled based on the player's Magic level, ranging from 50 at level 75 to 66 at level 99, which can be increased with magic damage boosting items. At level 99, the maximum possible hit is 80, or 89 while on a Slayer task.