From Old School RuneScape Wiki
Jump to navigation Jump to search
The official world for Volcanic Mine is world 323 (US West) (P2P).

The Volcanic Mine is a large volcanic chamber found underneath the Fossil Island Volcano. The mine entrance is located in the north-east corner of the volcano, with Petrified Pete guarding its entrance.

To enter the mine, players must have level 50 in Mining, have earned at least 150 Kudos and have claimed the five unidentified small fossils from Peter after fully building the Museum Camp. In addition, players must pay Petrified Pete 30 numulites every time they wish to enter the mine.

Upon entering the lower level, lava beasts will begin to appear and launch fireballs at players. Praying Protect from Missiles will reduce their max hit to 1.

To move around in the lower level, players must harden the lava by pouring water on it from the heat-proof vessel. This canteen has 35 uses per game (70 if the player has unlocked the larger capacity for 10,000 points), so don't run out. Water can only be thrown while the player is facing north, east, south, or west. Additionally, the water canteen can be right-clicked to open a dialogue box to throw water in a selected direction, or it can be worn to throw water through the equipment right-click menu. The lava hardened by the vessel will melt after 90 seconds, giving players limited time to stand on them. The hardened lava will turn more and more orange to indicate that it is closer to melting. If players remain on the hardened lava when it melts, they will fall into the lava, taking massive damage. 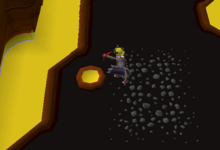 One of the gas vents in the mine 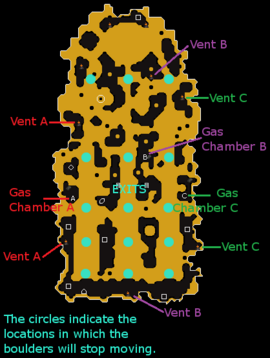 A map of the mine, displaying important locations the player should be familiar with.

After starting the game, gas will begin flowing through the three volcanic gas chambers into the volcano, marked on the minigame overlay as A, B, and C. There are two sets of vents for each chamber, with one set each on the downstream and upstream sides of the lava channels. Once these are investigated, the pressure of the vent will be revealed to all players on the overlay at the bottom right of the screen. After five minutes have passed, the chamber statuses will shift and their statuses will become randomised and hidden once more until players re-investigate the vents.

The gas chamber, blocked by a large rock.

Players can block the gas chambers with a large rock to make the pressure increase, or mine the large rock away from the chamber to make the pressure decrease. The pressure of each of the three chambers must be kept around 40-60%, or the volcano will become more and more unstable. Keeping the mine stability high decreases the frequency at which earthquakes and fireballs occur. If the mine stability reaches 0%, the volcano will erupt, killing everyone inside instantly; if this occurs, players who have not escaped via the rope exit will not receive any reward points or bonus experience.

There are several gas holes scattered throughout the volcanic mine. Players can "feel" them, upon which they are shot to the other side of the lava channel. Although this causes a small amount of damage, using the gas holes can be useful as they provide a shortcut for players low on water. 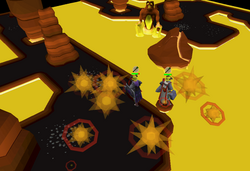 The mine collapsing in due to the mine's stability being too low.

Should players manage to completely mine the boulder, it will flow into the lava vortex, granting all players in the lower level 100 additional points.

At the end of the 10 minute timer, or if the mine stability becomes too low, the volcano will erupt and collapse in, instantly killing anyone who remains inside the mine. Thus, it is recommended to run for the exit when there are 30–40 seconds remaining.

Should the player die, Petrified Pete will collect all the player's lost items and return them for a fee of 150 numulites. If the player lost numulites when they died, Pete can use them to pay for the fee if the player doesn't have enough. Like other item retrieval services (such as those at Zulrah and Vorkath), Pete will lose all items he was holding for the player if they die anywhere before retrieving them.

"Capping" refers to blocking and unblocking a chamber for points. Each action gives 50 points, and the point limit for capping is 300 per player. Players who are doing A or B/C roles should do this in the start of a game, other players can do this in between the 4th and the last boulder, or in the end of the game.

Tip: Regardless of strategy, mining the boulder at the final part is a large portion of players' points. It degrades much faster if not everyone who entered the game is mining it — therefore you should ensure everyone is mining it at the same time. If someone falls into the lava while mining it, make a path to the platform north-east so they can return more quickly.

As the mine scales to the amount of players, it negatively affects the rest of the team if a player who entered at any point dies, disconnects or logs out. It is considered good etiquette to only start a game if you are confident you can finish it, and to inform the others in advance when you are leaving so that reassigning roles or finding replacements is easier.

If using a dragon pickaxe special attack, it is the most effective at the start of the second and final part. It has no effect past 99 Mining.

In teams consisting of three players, each player has a dedicated role. With very well coordinated teamplay, the team may finish the last boulder in time; however, in most cases, the players need to run to the exit before the last boulder has been finished.

Start at the eastern entrance. Check the southern B vent at the start and mine the boulder. Once the player with the B/C role has arrived to the boulder, head a little bit north and mine the boulder next to that player. At the five-minute mark, after C has been checked after the reset, fix C to the east if needed.

Start at the eastern entrance. Go north to the B chamber, cap it until 250 or 300 points, and leave it fixed. Head south and mine the boulder. At the third boulder and at 5:20 mark, run north to check the C vent followed by the B vent. Head back to the boulder, fix B on the way back if needed and continue mining the boulder.

In teams consisting of 4 or 5 players, four dedicated roles are needed. This strategy is also viable with teams consisting of up to seven people; however, having more than five is not optimal due to the decrease in experience rates and thus not recommended. Should the team have a fifth player, that player only needs to mine the boulder and cap the B chamber for extra points. With sufficiently coordinated teamplay, the team should rarely have issues finishing the last boulder in time, and usually have spare time for capping the B chamber in the end.

Start at the western entrance. Check the southern B vent at the start and mine the boulder. After the third boulder has been mined, run north and use the gas hole to go to the eastern side of the central channel. Continue mining the boulder.

Start at the eastern entrance. Mine the boulder normally until the five-minute mark. After C has been checked after the reset, fix C to the east if needed. If C doesn't need to be fixed, fix B at the fourth boulder if needed.

Start at the eastern entrance. Go north to the B chamber, cap it until 250 or 300 points, and leave it fixed. Head south and mine the boulder. At the third boulder and at 5:20 mark, run north to check the C vent followed by the B vent. Head back to the boulder, fix B on the way back if needed and continue mining the boulder.

The player could take advantage of the "capping" strategy by starting at the eastern entrance, going north to the B chamber, taking the large rock, and continuing north and then west to check the B vent followed by the C vent respectively. Afterwards, the player needs to go back to the B chamber, take another rock, block the chamber, unblock the chamber (by mining the blockage), and repeat until 400 points, and then leave via the exit. This method can be repeated and is strongly recommended for ironmen and players who are unable to find a team.

Alternatively, if not using the "capping" strategy, the player has to check and fix two vents and chambers, namely B and A check fixing if needed. This requires a few more stamina potions since the player will be running around a lot, and the upgraded canteen is recommended.

Start at the western entrance. Check the southern B vent at the start, and go west and then north along the path to the A vent. Fix A if needed. If B needs fixing, retrace the path, and run north from the B vent and use the gas hole to go to the eastern side of the central channel. Use the gas hole again, and follow the path to mine the boulder until the five-minute mark. At 5:00, recheck the vents, fix if needed, and continue mining the boulder.

A good equipment setup consists of the full prospector kit for the 2.5% extra Mining XP, whilst maximising prayer bonus.

Your inventory per game should consist of the following:

Should the player leave the mine alive (via the rope exit), they will gain participation points based on their performance in the minigame. Ore fragments obtained will automatically be given to Petrified Pete, who in return will grant the player a chunk of Mining experience and reward points that can be spent in Petrified Pete's Ore Shop, which depends on the performance of the team. Calcite, pyrophosphite, fossils and numulite earned from mining the rock will be kept. At the end of each game, Pete grants 3.8 Mining experience for each point earned (3.895 with the prospector kit bonus). Including the experience earned during the game, approximately 5.5 Mining experienced is earned per point. Players who die or teleport out will have their fragments disintegrate into nothing and will not receive any points or bonus experience.

The experience rates scale per level. At 50 Mining, the expected maximum is approximately 40,000 experience per hour (around 7200 points) and at 99 Mining, players can expect to get upwards of 85,000–95,000 experience per hour (around 15,400-17,200 points) with well-coordinated gameplay. This scaling is not entirely linear, as it is affected by the quality of the ore fragments mined, with the highest being runite unlocked at level 85.

The maximum amount of points that the player can have is 2,097,151; a warning message will be given when nearing the points cap. Runite ore normally gives the most value per point and each point has a maximum value of 13.17 at current GE prices. Volcanic ash is also somewhat valuable and useful for Ironmen.