Vorkath (roughly translated as pathetic failure/weakling/runt in the dragonkin's language) is a draconic boss-monster first encountered during the Dragon Slayer II quest as the penultimate boss. Created by Zorgoth during the Fourth Age's Dragonkin Conflicts, the blue dragon is one of his subjects that has survived his experiments in the laboratory beneath the dragonkin fortress on Ungael. Despite its phenomenal strength, Zorgoth abandoned this Vorkath on Ungael due to its lack of aggression, leaving it as a "distraction" for any humans that would stumble onto the island.

Vorkath is considered a blue dragon and zombie for the purpose of a Slayer task. As Vorkath is also undead, the Salve amulet and its variants will work on him. However, it does not stack with the Slayer helmet. Rings of recoil do not inflict damage on Vorkath.

Vorkath uses a variety of attacks, primarily ranged and magical attacks, as well as melee if standing next to him. Similarly to the King Black Dragon, he can also use three types of dragonfire: regular, venomous, and prayer-disabling kind. His dragonfire is stronger than other dragons' and requires more tiers of protection to block. The final common attack is a fireball he launches high in the air that must be dodged or it will deal substantial damage. 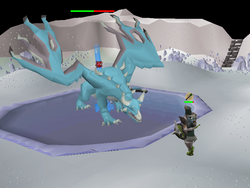 A player fighting Vorkath on Ungael.

Once Vorkath is killed, he will return to his original unaggressive stance. If Dragon Slayer II is completed, he can immediately be reawoken for another battle.

In addition to the 100% drops, the player will also have two rolls on Vorkath's drop table, excluding tertiary items, which have only one roll. The displayed drop chances represent a single roll.

Drops remain on the ground for 30 minutes, or until the player leaves the instanced area.

Drop rates estimated based on 154,350 kills from the Drop Rate Project, unless otherwise cited.

There is a 3/150 chance of rolling the tree-herb seed drop table.

There is a 5/150 chance of rolling the rare drop table.