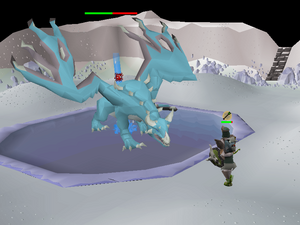 After completion of Dragon Slayer II, Vorkath can be fought again, this time, he is stronger.

Every seven attacks, Vorkath alternates between one of two special attacks:

The dragon hunter crossbow is the most effective ranged weapon to use against Vorkath, although its cost makes it unavailable for many players. The crossbow's passive effect damage and accuracy boosts stack with the Salve amulet (i)/Salve amulet(ei) and Void Knight equipment allowing players to hit a maximum of 74 with no special effects at 99 Ranged. Players should note, however, that the Salve amulet and Salve amulet (e) provide no bonuses to Ranged whatsoever; the amulet must be imbued to provide Ranged bonuses. In order to take the least amount of damage possible, players should use a dragonfire ward or anti-dragon shield with the dragon hunter crossbow, while praying Protect from Missiles. The dragonfire shield is an inferior option to the anti-dragon shield despite its defences, as it provides a negative Ranged bonus. Other offhand items such as the twisted buckler or book of law force players to pray Protect from Magic, causing them to take more damage each kill, and shortening their trips. With 99 Ranged and a high Defence level, players should expect anywhere from 3-6 kills with this setup. Rings of recoil do not inflict damage on Vorkath.

The Toxic blowpipe is an effective method of killing Vorkath for those who cannot afford a dragon hunter crossbow. Players should use Void Knight equipment if using a defence-reduction special attack weapon. Otherwise, using standard ranging armour (such as black d'hide) will usually be higher damage output and provide higher defence than normal void equipment, while elite void is still quite strong. Players should use Protect from Magic with the blowpipe along with a super antifire potion. Players should use a Bandos godsword or dragon warhammer at the start of the fight to reduce Vorkath's defence. After each successful Vorkath kill or failure to reduce Vorkath's defence with both special attacks, players should replenish their special attack bars with a restoration pool or better. At 99 Ranged and rune darts, it's advised to stay regardless of whether or not the player has landed a special attack.

The dragon hunter lance is the most effective melee weapon to use against Vorkath. The lance's passive effect damage and accuracy boosts stack with the Salve amulet (e) or Salve amulet(ei), allowing players to hit frequently and high. Players use Protect from Magic and wear the best melee armour possible, attacking Vorkath once before moving away while taking note of his attack speed. This will ensure that the player will always avoid his melee attacks, and only take damage from dragonfire and ranged attacks. If using a Bandos godsword or dragon warhammer, players should first lower Vorkath's defences so that their attacks are more accurate.

Tip: Bringing a Slayer's staff while setting Crumble Undead as the auto-cast spell is an easy transition and safer alternative to using the spell from the spellbook.

Note: This setup requires you to have 90 Ranged, Attack, Hitpoints, 74+ prayer with elite void, Salve amulet (ei), Bandos godsword, and the toxic blowpipe.

Tip: If choosing not to use a staff to autocast Crumble Undead, make sure that your magic bonus is higher than -64, otherwise you will occasionally splash on the spawn.

Upon awakening, Vorkath's attack pattern consists of six random standard attacks, one special attack, six random attacks, then the other special attack and so on until defeated. Players should keep run off throughout the kill and use control click to run when needed.

Offensively, Vorkath has 560 Attack, 308 Strength/Ranged, and 150 Magic, alongside +16 melee, +150 magic and +78 ranged accuracy. Defensively, Vorkath has a Defence level of 214, with +26 stab/ranged, +108 slash/crush and +240 magic defence bonus. This makes Vorkath similar to most dragons in that he is weak against stab melee and ranged.

The optimal protection prayer to use then depends on the gear being used:

Vorkath can hit up to 30 with magic, and 32 with melee and ranged. His high attack level means his melee attacks are very accurate, although it is less common compared to magic and ranged, and is only performed in melee distance. Players should have quick-prayers set according to their combat style and weapon type to reactivate prayers when deactivated by the pink dragonfire. Players should also be prepared to click at least two spaces away if Vorkath uses his insta-kill vertical dragonfire lob.

Vorkath is capable of envenoming players with his venom dragonfire (as such, bring appropriate venom protection). The pink dragonfire turns every single active prayer off, including Preserve; for this reason, divine potions are recommended over normal potions.

Recoil damage, such as Vengeance and rings of recoil, does not work on Vorkath.

A player dealing with Vorkath's acid pool and dragonfire barrage.

When Vorkath spits poison pools on the ground, players should continuously walk on clean ground to avoid damage. As long as players are moving, Vorkath's quick-fire barrage will not deal damage. Standing or moving over an acid pool leeches health from the player and heals Vorkath. Protective prayers may be turned off to reduce prayer drain, as they do not affect these attacks.

There are two ways to deal with this attack:

Using tick-perfect movement to deal damage while taking none

Players using a dragon hunter crossbow may take this opportunity to use the toxic blowpipe special attack to heal, as they are safe from dragonfire damage (provided that they do not stop moving at any point). Despite the damage reduction, the special attack heals as normal, as if the damage was not reduced.

After the attack, remember to re-enable your protection prayer (if you toggled it off), and toggle run on (according to preference).

Vorkath's other special attack is the zombified ice dragonfire. Vorkath will launch white dragonfire at the player, applying an Ice Barrage effect.

Vorkath then lobs a Zombified Spawn into the air which lands several spaces away and crawls towards the player. Vorkath channels immunity from the spawn. If the spawn touches the player, it will explode and deal damage based on a percentage of its health when it did so, dealing up to 60 damage if left untouched. The spawn has 38 health, but the Crumble Undead spell will instantly kill it regardless of your magic attack bonus, as long as it is not -64 or lower (although it is still possible to splash at -63 or higher, it is extremely unlikely).

The slayer's staff can auto-cast Crumble Undead, so a quick switch to the staff is all that is required. With practice, it is useful to switch your prayers off during this special attack to save prayer points. When the spawn dies, either by Crumble Undead or it reaching the player, the Ice Barrage effect is lifted, and Vorkath can be harmed again. A message will appear after the spawn explodes or is killed, indicating the bind and damage immunity effect has been lifted. With practice, a bite of food or a sip of potion may be consumed in the delay between killing the spawn and the chat-box message indicating that damage may be dealt again.

Banking and getting there quickly[edit | edit source]

It is recommended to use Fremennik sea boots 4, have your house in Rellekka, use an Enchanted lyre (or Enchanted lyre(i)), use a Rellekka teleport, or have a portal attuned to Lunar Isle or Waterbirth Island. After each successful Vorkath attempt using the toxic blowpipe, or once out of supplies with the dragon hunter crossbow, players should re-gear with one of the following methods: