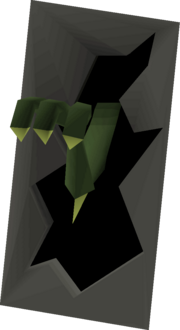 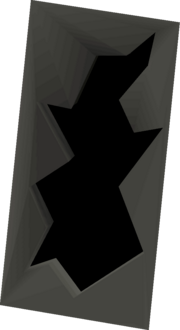 A wall beast is a Slayer monster that requires level 35 Slayer to kill. A spiny helmet or Slayer helmet is required to start fighting one. Players without 5 Defence would not be assigned these as 5 Defence is required to wear the helmet. This monster is not very popular, due to the fact that its drops are poor with the exception of the mystic hat. It is found only in the Lumbridge Swamp Caves. Be sure to bring a rope and a light source.

This creature is infamous for surprising, and sometimes killing, low-level players who are traversing through the Lumbridge Swamp Caves. To avoid the Wall beasts, simply run past the "Hole in the walls", avoiding the tile they are adjacent to. Wall beasts can be a good source of guams due to the fact that it's the only herb they drop.

Players should wear a spiny helmet or slayer helmet whilst fighting wall beasts, otherwise they will grab them by the head and slam them against the wall, removing up to 18 hitpoints.

If players wear a spiny helmet, the grabbing attack will fail, allowing them to be fought normally. A wall beast's maximum hit on a player wearing a spiny helmet is 4. You may also wear the slayer helmet, as it is combined with the spiny helmet.

The spiny helmet is only required to initiate combat with a wall beast. Once it has started attacking normally, it can no longer grab the player's head, allowing a black mask to be used.

The wall beast does not count as a large monster and therefore the dragon halberd's special attack does not produce two hits on it.

The best location to slay these is in the south-west corner of the dungeon where there are two spawns located extremely close to one another. It is easy and effective to simply run back and forth between each spawn after completing a kill.

In addition, you can quickly make a beast reappear by leaving the dungeon and entering it again, making the beast located west of the entrance available to slay again.

Alternatively, if players start an uninterruptible animation during the death animation of the wall beast, it will respawn instantly after the animation completes. Some examples are:

Despite their relatively high level, wall beasts have a low max hit and can easily be killed by a player with low combat. 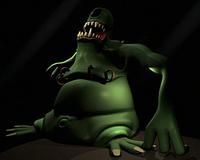 A full body view of the Wall Beast, shown in Postbag from the Hedge
Retrieved from ‘https://oldschool.runescape.wiki/w/Wall_beast?oldid=14287450’
Categories:
Hidden categories: